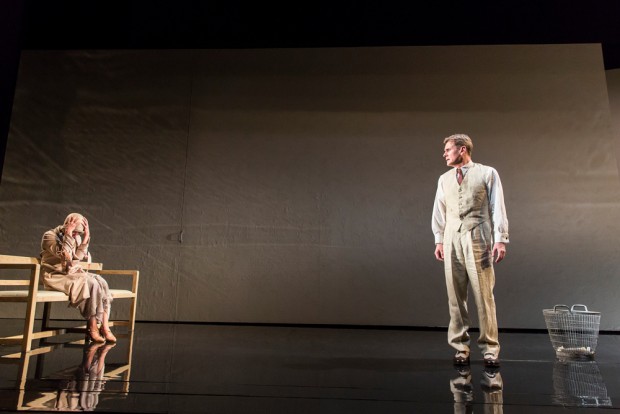 Do scandals have a sell-by date? When it comes to sex and politicians, the answer is no. The tabloids, and the news-hungry public, still seem to relish a good story about a powerful man who is caught with his trousers around his ankles. So Harley Granville Barker’s Waste — first put on in 1907 and then rewritten some 20 years later — is ostensibly a highly relevant drama of a personal tragedy in which our characteristic national mix of prurience and puritanism gets a longwinded airing. Certainly, the plot is instantly recognisable.

At its centre is a maverick independent politician, Henry Trebell, who is a cold and celibate bachelor devoted to both his sister, Frances, and his work. But mainly to his work: he has ambitious plans for a controversial Act of Parliament to reform relations between Church and state. But his career is ruined because he has a brief fling with Amy O’Connell, the estranged wife of an Irish Republican. Amy gets pregnant, but doesn’t want the child; Henry offers to help; she has an abortion, and dies. Now the scandal threatens both Henry’s career and the success of his reform of the established church. Can a wily cabal of interested politicians save the situation — and what price will Amy’s husband, Republican Justin O’Connell, extract from them?

The story has some small contemporary resonance: its political situation involves a hung parliament, the perennially irritating issue of the existence of an established church and the blatant sexism of men in power. Its best scene shows how deals are made in smoke-filled rooms, and it’s clear about the give-and-take of high politics. Henry’s idealism inevitably gets choked in the practicalities of parliamentary government. And Granville Barker captures the essentially English flavour of this situation, our national preference for pragmatism over abstract intellectualism. As one of the cabal says, “A man of ideas is often a grave embarrassment to a government.”

Likewise, the relationship between Henry, a rather pitiless cold fish, and Amy, a young woman who is full of life, is depressingly awkward. He tells her that he prefers his work to women, and Amy eventually confesses that she doesn’t like men very much — and (with this experience) you can see why. Although both are quite conceited in their own way, Henry’s indifference means that their relationship will remain emotionally, if not physically, barren. Whether consciously or not, Granville Barker shows us a man who is afraid of women, and a woman who sees herself as an “unclean sick beast”. Centuries of puritanism rejoice in their coupling.

The trouble with Granville Barker is that he loves the sound of his own voice too much and, although he never manages to be as witty as George Bernard Shaw or as provocative as Henrik Ibsen, he certainly writes and writes and writes. Pages and pages. Each scene cries out not for the censor, but for the script-editor. The result is a three-hour play whose relentlessly masculine voices finally freeze you into hibernation, with only a tender exchange between Henry and his sister in the final half hour to raise the emotional temperature above zero.

Roger Michell’s elegant production, on Hildegard Bechtler’s stylishly wintry set, has a colour palette that is suitably beige, grey, ochre, black and white. For me, it will always be “that beige play with colours as arid as its sensibility”. Still, it features solid performances by an icy Charles Edwards and a warm Olivia Williams as Henry and Amy, with Sylvestra Le Touzel as the motherly Frances. Of the host of other characters, I particularly liked the northern Blackborough (Louis Hilyer), the sincere Cantilupe (Gerrard McArthur) and the twinkle-clever Justin (Paul Hickey). But, honestly, after listening to Granville Barker for a whole evening I just felt wasted.