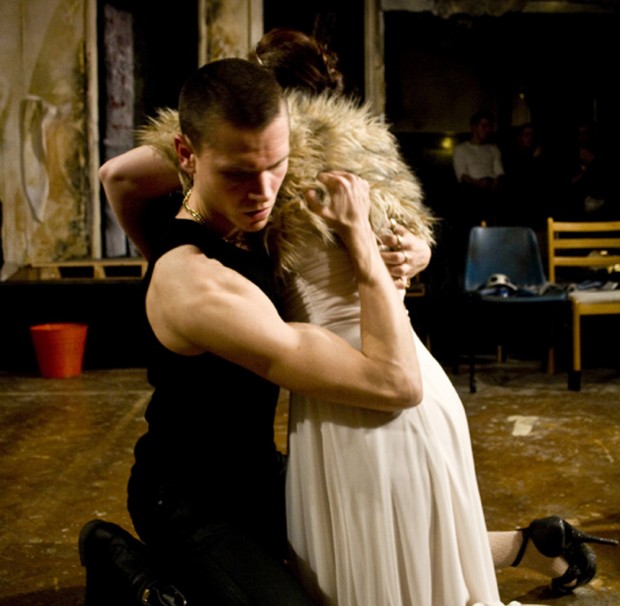 Are you sitting comfortably? Now imagine a future, a near future, in which gangs of teenage boys roam the deserted streets of the metropolis, selling hallucinatory butterflies and organising parties in squats for rich clients who have extreme tastes in sexual abuse. Imagine. Not so comfortable. This is the vividly conceived sci-fi world of Philip Ridley’s Mercury Fur, first staged by Paines Plough in 2005 and now revived in an old London office block by the thrilling fringe company Theatre Delicatessen.

The story concerns two teenage brothers, Elliot and Darren, who help the gang leader, Spinx, organise extreme parties in which a Party Guest acts out his violent fantasies on an underage Party Piece, and then videos the gut-wrenching action. It is a survival strategy in a collapsing world. Elliot and Darren are a study in contrast: while Elliot is pretty together, and moves through this blasted landscape with grace and intelligence, his brother is a drug-addled loser, his brain eaten away by addictive hallucinatory drugs.

As Elliot and Darren prepare their sordid party, Spinx arrives, and events begin to spin out of control as several unwanted visitors come onto the scene: Naz (a local boy), the Duchess (the brothers’ mother), and Lola (Elliot’s transvestite lover). With a countdown in place towards a terrifying deadline, all the elements of this fierce drama gradually slot into place.

Ridley’s 120-minute shock-fest, which caused a huge uproar on its first outing as some critics condemned its author for having sick fantasies, is brilliantly written and fully imagined. Without ever being preachy, Ridley shows how our identity depends on keeping a grip on historical truth and how we create, and recreate, reality by telling stories about it.

If some of these stories are horrific (there’s a very unpalatable one set in a supermarket where a machete-wielding gang of looters massacre mothers and kids), then surely this is because war and violence are themselves horrific. Ridley refuses to glamorise violence and the terrifying party that the lads are organising is really just a logical extension of some men’s fixation on violent pornography. Yes, this is a challenging mix of sensation and repulsion.

Partly a state-of-the-nation play, and partly a study of family relationships under extreme pressure, Mercury Fur is a modern-day classic whose language blisters and blazes across the stage, and whose intensely felt imagination burns up the brain cells. Staged in a disused London office block, at the side of Selfridges, the play begins with a creepy ascent up some dodgy stairs and through a gloomy corridor into the room where the horrors take place. Uncomfortable seats keep the audience on edge throughout.

Atmospherically directed by Frances Loy, and designed by William Reynolds, this version fields an utterly committed cast led by Matt Granados as Elliot, Chris Urch as Darren, Ben Wigzell as Spinx and Mikey Bharj as Naz. With its bleak humour, and powerful sense of foreboding, this is a dangerous, intense and occasionally excruciating piece of experiential theatre. It is not family viewing. You stumble out of this dark and hellish world, gulping the fresh air of the night, and mighty glad to be alive.