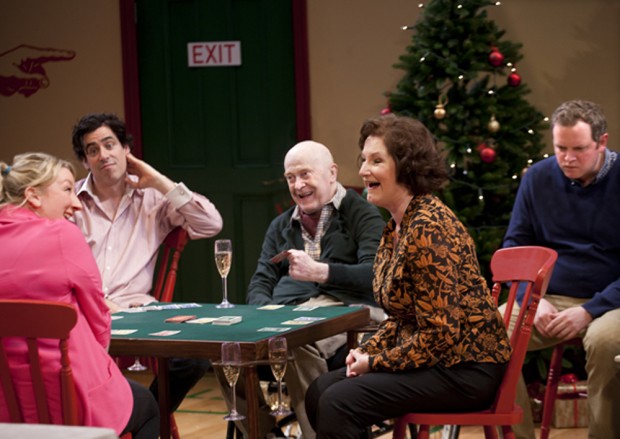 The seasonal family reunion play is a hardy perennial. Like the Christmas tree that must take its place on the stage, it is usually spiky, dry and decorated with glittering ornaments — as in acidic jokes, acute embarrassments and ghastly revelations. Into every yuletide family a stranger must come, and all the most careful preparations must be ruined. Normally, everyone gets drunk, food gets thrown and truths get told. But if these are the rules of the genre, how does Sam Holcroft’s new drama bend them, and play with them?

So, first things first, let’s do the introductions: mum is sixtysomething Edith (Deborah Findlay), who is married to Francis, a solidly respectable retired judge currently in hospital after a heart operation. To welcome him home for Christmas Day, she has made a special effort to serve up a festive celebration to remember. As always, she has strict rules of conduct. These are familiar to her two sons, Matthew and Adam (Stephen Mangan), who are both lawyers. Matthew is a big success, and has come with his new girlfriend Carrie (the genre’s compulsory outsider). The older Adam, less successful, arrives with his wife Sheena.

Adam and Sheena have come with their young teenage daughter, Emma. She is lying down in a bedroom upstairs, which enables her mother Sheena to explain that she is suffering from Chronic Fatigue Syndrome, and needs Cognitive Behavioural Therapy. By now, we know that this family reunion play has an extra additive: the set, designed by Chloe Lamford, is laid out like a board game, and there are scoreboards on two sides of the traverse staging in the intimate Dorfman Theatre. This is clearly an anti-Christmas drama.

The scoreboards lay out the rules for living, the strategies of behaviour in daily life, that the characters live by. Matthew, for example, “Must sit to tell a lie”; Sheena “must drink to contradict”; and Edith “must clean to keep calm”. As the day develops, these behavourial patterns get augmented and elaborated. This imaginative device alerts us to the concealed motivations and habitual moves of the characters, as well as creating exquisite moments of tension when apparently innocent actions become excruciating embarrassments. This sets up expectations which heighten our enjoyment, and the piece’s overt theatricality.

The effect is that of an Alan Ayckbourn play which has been injected with a good dose of MDMA. Suddenly everything is shiny, bright; you instinctively love this drama. When, in the second half, Francis arrives, and the characters all play Bedlam, a surreal craziness envelopes the stage. And as the family finally sit down to eat, events quickly spiral completely out of control, and there is a lot of satisfying emotionality. Rarely has the cliché that “family is everything” been quite so thoroughly beaten up. There is a real joy in truth-telling, however vicious. And boy is it vicious.

Holcroft carefully gives scores for each character’s behaviour, and in a short final scene shows, a bit didactically perhaps, each individual’s struggle to change. At some moments, I was reminded of Lucy Prebble’s The Effect and one climactic entrance was strongly reminiscent of the end of Caryl Churchill’s Top Girls. Still, Holcroft gives a brilliant reading of how we form alliances in families and how small tokens of complicity can sometimes turn into deeper attachments. Rules are broken, lies are told, little secrets exposed.

Marianne Elliott’s sharply focused production can’t quite hide a certain lack of emotional depth in the writing, and I had the feeling that the playwright is more generous to the younger women than perhaps they deserve, but there is plenty to savour and enjoy in the performances of Mangan as the desperate and undervalued Adam, Findlay as the snobby and controlling Edith, Claudie Blakley as the gutsy Sheena, Miles Jupp as the underhand Matthew and Maggie Service as the manic Carrie. Rules for Living is a compellingly theatrical idea that makes for a highly entertaining evening. Great stuff!