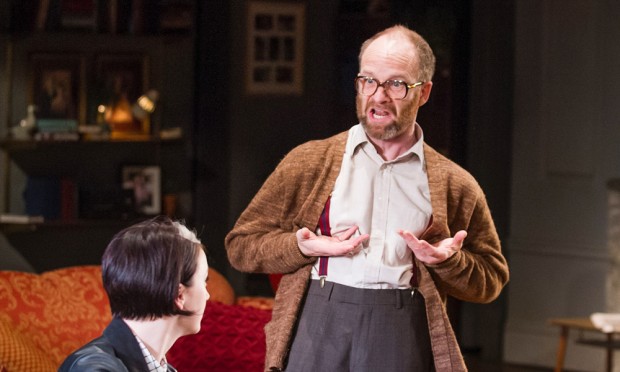 This is probably the best new play that I have seen for months and months, not the best in a revelatory, wow this simply amazing way, but in a calmer, wow this is so well crafted and so deeply felt and so human it makes me feel great type of way. So it’s almost impossible (for me anyway) to write about it and to do it any kind of real justice. It’s a five-star play and today I’m just a three-star writer. Anyway, enough about me.

The playwright is Tena Štivičić, a Croatian-born London resident who makes her National Theatre debut with a complex and moving epic that spans four generations and 70 years of Croatian history — and she does it with such playwriting skill that it strikes me as the best new play of the year (yes, I know I’m repeating myself, but love does that, and it is possible to fall in love with a play — right?).

Set in the Kos family home in Zagreb, 3 Winters flashes back and forwards between 1945 (birth of Communist Yugoslavia), 1990 (an independent Croatia on the verge of civil war) and 2011 (negotiations with the European Union). In 1945, Rose, a young communist, and her husband Alexander appropriate a flat in the house of Karolina, an aristocrat who once threw Rose’s mother, a servant, out onto the streets because she was pregnant and unmarried. By 1990, Rose’s daughters — Masha and Dunya — are grown up, and Masha is married to Vlado Kos, a historian. In 2011, Masha and Vlado’s daughter Lucia is on the eve of her own wedding — and there are plans for the family to take over the whole building. But as Alisa, Lucia’s sister, returns from London, she makes an intervention that threatens the family’s future.

The beauty of this structure is that each of the historical periods are not what you’d expect. The big climactic events — Tito’s break with Moscow; the dreadful siege of Vukovar — are approached indirectly. Instead, Štivičić concentrates on events leading up to the mighty moments of national history, so her choice of scenes is suggestive rather than declamatory; she shows times which are pregnant with meaning, those moments in history when things could go either way. The crossroads, not the end of the way.

The family story, which concentrates for a change on women (all of whom are so much more impressive than their menfolk), is clearly told and engrossing. Okay, before the show, I knew very little about postwar history of the Balkans. Apart from some information that came knocking on the door during the Bosnian wars of the mid-1990s, I wasn’t really sure of exactly what happened to Croatia or in Zagreb. So the programme notes were useful, although for those of us who travel regularly in Europe, the general situation of the play will have resonance. In northern Italy, which I know well, the legacy of the Partisans from the second world war is similar to that depicted here. This is one of those plays that demands concentration, but repays it too.

Štivičić’s sound dramatic instincts result in some superb set pieces. By choosing a series of family celebrations, she gives herself lots of opportunities to develop her characters, for dramatic irony, and for unexpected twists of fate. The characterisation is sharp, the dialogues emotionally truthful and funny, and the visual and verbal imagery both beautiful and brutal: at one point, there is a description of a terrified horse that is unforgettable. At another, Lucia has a speech which so surprises the audience that it gets a spontaneous round of applause.

Howard Davies’s brilliant production, designed by Tim Hatley, tells the often painful story of both family and nation with fluency and precision. His large cast features outstanding performances from, among others, Siobhan Finneran (Masha), Susan Engel (Karolina), Adrian Rawlins (Vlado), Lucy Black (Dunya), Daniel Flynn (Dunya’s husband), Sophie Rundle (Lucia) and Jodie McNee (Alisa). When I left the theatre I was walking on air — and my immediate conviction was that this is best new play of 2014. PS: Even when I’d sobered up, I thought that this is still a really great evening. So I went to see it again! And, guess what, I wasn’t wrong: it was still really good!