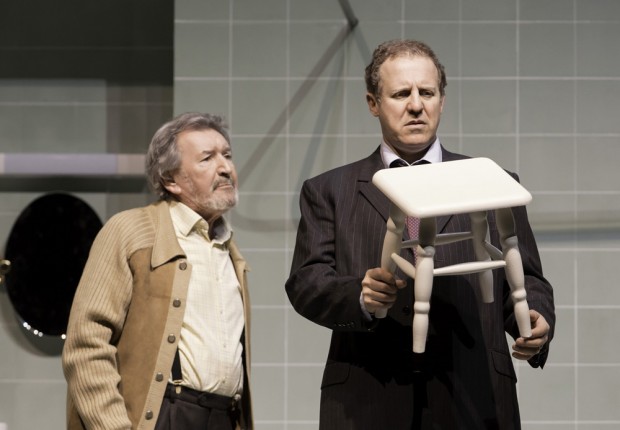 Are the 2010s a rerun of the 1980s? You know that familiar feeling of déjà vu: economic collapse, royal wedding and Tories in power. Not to mention privatization and the spirit of rampant capitalism abroad in the land. Surely, these are the ideal conditions for a revival of Alan Ayckbourn’s exposé of entrepreneurial greed, A Small Family Business, at the National Theatre, where it premiered in 1987. But does the play’s criticism of dishonesty remain resonant today?

Unsurprisingly, this is a family story. It starts with Jack McCracken taking over the family furniture business, which was founded by his father-in-law Ken, now a bit senile. Jack quickly establishes himself in our minds as a bloke who wants to be honest, whiter than white. Then he finds out that members of his own family — daughters Samantha and Tina, wife Poppy, brother Cliff and Poppy’s brother Des — are all less than spotless in the honesty department. Prompted by the sleezy Hough, a private detective, Jack uncovers more and more family secrets, more and more corrupt ways of making a profit. And the play is punctuated by debates and dialogues about morality in everyday life. Is stealing from big shopping chains okay because they are huge enterprises who write off such losses? Jack thinks not. He doesn’t like the idea of bending the rules, of fiddling, of thieving.

Yet in this world of flexible standards, Jack’s honesty seems like fanaticism — and he comes across as a freak. As Polly says about fiddling: “It’s not dishonest — it’s just a little fuzzy around the edges.” But the system, which is based on the idea not only of business, but also of the family, is gradually revealed to be corrupt. And this corruption slowly erodes all decent human feeling and all intimate relationships until the final depressing tableau looks like poetic justice.

In the past, I have not really appreciated Ayckbourn’s writing style. I’ve found it bland and anaemic. But in this play it feels like a lively parody of the different registers of language spoken by the middle classes: from Jack’s moralising to the whining justifications of his family, from Hough’s bureaucratic formulations to Samantha’s teen warblings. Yes, it’s bland, lifeless and uninteresting — but it is also a sentence passed by the author on his characters. Their linguistic inadequacies are the result of their moral failings.

Ayckbourn’s other great asset is his ability to juggle plot lines and locations in a thrilling way, which enables the story to unfold at the same time in different locations on stage. The same set — a suburban house — is used for the homes of all the main characters, which is likewise a comment on the uniformity of furnishings, which match the uniformity of a greedy worldview. And, as ever, Ayckbourn also gives us a comedy of manners in which embarrassment is a keynote. Everyone says the wrong thing in the wrong way to the wrong person at the wrong time. Heady stuff.

What is missing is any real sense of political context. Thatcher and Thatcherism make their power felt by their absence; the piece, while often funny, never really feels resonant. Or provocative. Ayckbourn’s gift for closely observed English mores simply doesn’t take off into a more incisive criticism. But there is much to like in Adam Penford’s bouncy production. As per house style, Tim Hatley’s set rotates nicely to show us the outside as well as the inside of the suburban dwellings, and a lovely visual quotation from The Exorcist made me smile. As Jack, Nigel Lindsay graduates from cuddly bear to roaring grizzly before settling for mafia bear (cue visual quotation from The Godfather). Debra Gillett shines as his wife Poppy and Stephen Beckett, Alice Sykes and Niky Wardley play assorted family members with great brio. Gawn Grainger is a convincing Ken and Matthew Cottle is a wonderfully slimey Hough. They boost a so-so play into an entertaining evening.