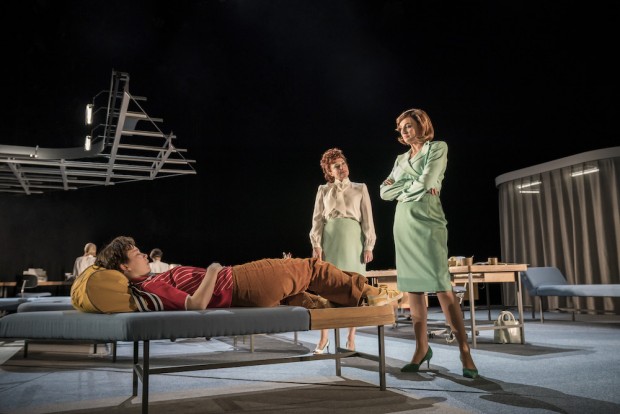 Caryl Churchill is a phenomenal artist. Not only has she written a huge body of work, but each play differs in both form and content from the previous one, and she has continued to write with enormous creative zest and flair well into her maturity. Now in her 80th year, she can look over her shoulder at a back-catalogue which is stuffed full of contemporary classics, and a handful of masterpieces. Her 1982 play, Top Girls, finally getting a revival at this national flagship, is her masterpiece of masterpieces. Yes, it’s that good. It proves, if proof were needed, that she is clearly the best living British playwright.

The play tells the story of two sisters, the older Joyce and the younger Marlene. Brought up in the Suffolk countryside by parents who struggled with poverty, with the father a brutal alcoholic, Marlene unexpectedly left home when she was a teenager, and has made a successful career ever since. She is, in her own words, a “high-flying lady”, and the play begins with her celebrating the fact that she has been appointed managing director of the Top Girls employment agency. Soon after, she has to deal with Mrs Kidd, the aggrieved wife of Howard, a colleague who expected to get the top job simply because of his sex. In the words of his wife, Marlene is a “ball-breaker”.

By contrast with the jet-setting Marlene, her sister Joyce has stayed at home, looking after their parents, and now with a teenage daughter called Angie, who is not doing very well at school and whose best friend is Kit, a much younger girl. Joyce is separated from her husband and scrapes by with a handful of local cleaning jobs. Churchill not only compares the life outcomes of the two sisters but also, in the climactic final scene, explores the differences in their politics. Joyce has inherited their father’s Labour and pro-trade-union views, and is emotionally a militant lefty, while the Tory Marlene is a great admirer of Margaret Thatcher, whose free-market policies she praises.

To little Angie, Marlene is a wonderful aunt. Whenever she visits Joyce, she brings presents for both her sister and her young niece. In fact, Marlene is such a contrast to Joyce, that Angie fantasizes about matricide, and plans to run away from home to visit Marlene in London. When this actually happens, the sisters have to face up to how limited Angie’s prospects are. Churchill tells this story with a deeply empathetic feeling, and a marvelously mischievous sense of theatre form. Instead of recounting events in a solely linear way, she breaks up the story into fragments and shuffles these around, keeping us guessing and heightening the dramatic irony.

From the start, Churchill shows her most playful side in the first scene, in which Marlene celebrates her promotion not by having drinks with her work colleagues, Win and Nell, but by dining, in a fantastical dream episode, with a group of famous women from history: so we see her chat and eat and drink with Isabella Bird, a Victorian traveler; Lady Nijo, a Japanese courtesan; mythical Pope Joan; Brueghel’s Dull Gret; and Chaucer’s Patient Griselda. The mixture of real and fictional women gives the feminist concerns of this all-female play a richly nuanced historical depth, showing how the problems of women having children, or not, has profound roots in the past.

In the play’s present, the same tensions inflect the relationship between the child-caring Joyce and the single Marlene, with Churchill making a strong statement about nurture being more important than nature, practicality more significant than biology. In the play’s original moment — the election of Thatcher as Britain’s first female prime minister — the debate in the drama between bourgeois feminism and socialist feminism is fully articulated in Act Three when Marlene visits Joyce, and this reflects the tensions between different forms of feminism even today. In the context of Britain having another female prime minister, all this has not dated. And in the office scenes, as much as in the domestic sphere, the problems of balancing work and life, career and children, remain much the same. In addition, Churchill’s picture of two warring siblings, a family split by class and ideology, has renewed resonance in the Brexit era.

Lyndsey Turner’s fluid, often humorous and visually high-definition production frees the story from the 1980s, exemplified by designer Ian MacNeill’s shiny steel office set and very tight, almost cinematic, stage pictures. The whole production has a sense of freedom and openness that serves the subject matter well, and the use of this version of the text, which focuses on a linear version of Angie’s tale in Act Two, prefers clarity to formal experimentation. My only doubts are with the use of overlapping dialogue, one of Churchill’s radical innovations in 1982, and which might work in some theatres, but here in the Lyttelton space results in some muddy passages. Less naturalism in the rural scenes might also have allowed for more flow and a sharper degree of conflict between Marlene and Joyce. Yet none of this detracts much from the pleasure of watching compelling ideas get such a theatrically canny staging.

Most of all, it is the acting of a large, numbering 18, and diverse cast that carries the drama: after all, the National’s resources mean that there is no need for doubling, which is usual in other productions of this play, so the whole evening has an epic scope. Katherine Kingsley’s Marlene is vividly confident and ballsy while Lucy Black’s Joyce is well-grounded in her rural and left-wing persona. Liv Hill and Ashna Rabheru give the Angie and Kit episode a real flavour of childishness, and the opening scene takes off thanks to Siobhan Redmond (Isabella), Amanda Lawrence (Joan), Ashley McGuire (Gret), Wendy Kweh (Nijo) and Lucy Ellinson (Griselda). As Nell and Win, Nadia Williams and Charlotte Lucas are full of zap; Roisin Rae is a pleasingly pleading Mrs Kidd. This is a brightly directed version of a supremely intelligent drama.