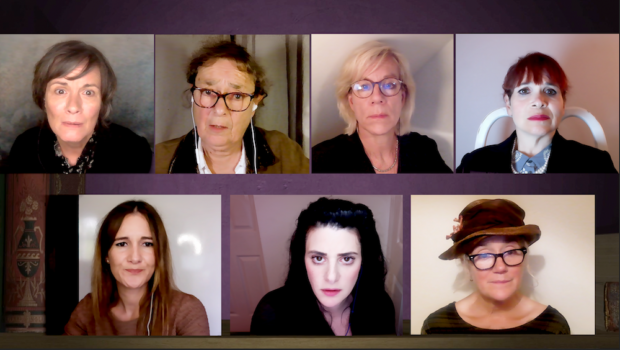 A bit of background always helps, so here goes: decades ago, in the USA, The Dick Cavett Show chat fest, which was aired on PBS, was often a celebrity love-in. But sometimes sparks did fly. In 1979, he invited veteran critic and novelist McCarthy and, in the course of the interview, asked her which writers she thought might have been over-praised. A casual question that sparked an explosion. After a few comments on John Steinbeck and Pearl S Buck, McCarthy attacked Hellman, calling her “a bad writer, overrated, a dishonest writer”. Wow. The result was a law suit which went on and on, and only ended when Hellman died in 1984.

In this feud, which has a backstory because the two women already clashed at Sarah Lawrence College in 1947, a key issue was Hellman’s claim that she had, during the war, met the anti-fascist freedom fighter Muriel Gardiner — and McCathy’s criticism that Hellman had, in her writings, stolen Gardiner’s experience of rescuing Jews and being an anti-Nazi spy. So how does McCasland’s version deal with this complex story? At first sight, he takes a superbly creative angle: he has penned an imaginary conversation between a whole group of female artists, not only Hellman (Stevenson), but also literary big shots such as Gertrude Stein (Bassett) and Agatha Christie.

Set in the French Alps in 1940, just as the Nazi invasion is under way, the hosts are Stein and her lover Alice B Toklas, and their other guests include not only Gardiner, but also Dorothy Parker. In this fantasy dinner party, with its echoes of other imaginary meetings — such as those in Caryl Churchill’s Top Girls and Tom Stoppard’s Travesties — the chatter follows the whisky and ranges from witty but snide putdowns to a heated discussion about how to save Jews in Europe from Hitler’s seemingly unstoppable war machine. Surely we should support their salvation.

And yet, Hellman argues, is there any point in risking your life in a suicidal bid to help a handful of Jews to freedom? Gardiner, an undercover anti-Nazi, responds that every single life saved — and she helps hundreds to escape — is worthwhile, even if many millions can’t get to freedom. Since most of the characters, including the young house maid Bernadette, are Jewish, the arguments have a richly emotional depth. Added to this, the fact that Stein and Toklas are a couple adds questions about anti-LGBTQ prejudice to the racism that is being contested. The piece’s relevance is not in question. As a comparative outsider to these Americans, Christie acts like a police investigator, framing sharp questions and never being fobbed off with an evasive answer.

It has to be said that McCasland is marvellously empathetic to all of his characters, and this is both his strength and his weakness. They all get more or less equal stage time, which is great but at the same time does feel rather formulaic and awkwardly explanatory. Still there’s plenty to enjoy in the piece’s jokes, and then, later on, the final harrowing monologues about the genocide are both powerful and deeply moving. This is positively electrifying stuff. Each of the women comes across as a complex mixture of self-knowledge and self-doubt. A lot of illusions are shattered in this two-hour show.

Typically for these troubled times, this is a rehearsed reading so the actors are all isolated in their own homes. While this means that they do not interact very much, the zoom format is crisply managed by editor John Walsh Brannock, who helps director Hannah Chissick create a fluid production, which highlights Stevenson’s spiky Hellman, who not only gets a helping hand from the playwright, but is both morally rehabilitated and rather unattractive. Eat your heart out, Mary McCarthy. Bassett’s Stein is by turns boastful, querulous, flirty and fragile, while Catherine Russell’s Alice B Toklas is beautifully sensible and conciliatory.

As far as the celebrity guests are concerned, Sophie Thompson’s Agatha Christie, with her skepticism and sharpness, is a neat contrast to Sarah Solemani’s earnest and committed Gardiner. Likewise Natasha Karp’s eloquent and passionate Bernadette is well contrasted with Debbie Chazen’s Dorothy Parker, a dipso who you feel is on the edge of breakdown. Made by Ginger Quiff Media, in collaboration with Southwark’s Union Theatre, the proceeds of this production are in aid of Women For Refugee Women, a cause that is both always timely and certainly resonates with the message of the play.