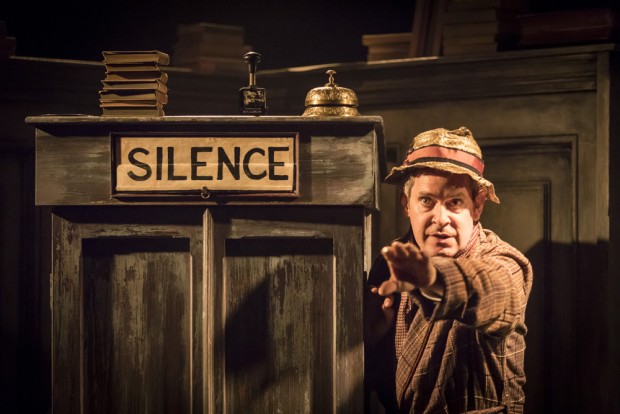 Is this the most dazzling play of a dazzling playwright? First staged in 1974, Travesties is the one which manages to squeeze avant-garde novelist James Joyce, Dada godfather Tristan Tzara and communist revolutionary Lenin into a story which resembles a riotous party, where Wildean pastiche, political history, debate about art, unreliable memory and song-and-dance routines stay up half the night, and howl gloriously at the moon. This revival stars the ubiquitous Tom Hollander, taking a break from Rev and making up for being cruelly miscast in The Night Manager, and is directed by playwright Patrick Marber.

Set in Zurich in 1917, a neutral safe haven while the rest of Europe was deep in the First World War, the comedy centres on Henry Carr (Hollander), an inconsequential consular official. Years after the events it depicts, Carr reminisces about Joyce, Tzara and Lenin (who were all in the city at the same time), and his role as Algernon in an amateur production of Oscar Wilde’s classic The Importance of Being Earnest. As in Rosencrantz and Guildernstern Are Dead, Stoppard includes his own versions of characters from Wilde’s drama, namely Gwendolen and Cecily, and has chosen to write some of the scenes in a wonderful variety of different tones: one in the form of limericks and another in song, another as an exam Q&A, and yet another as a verbatim transcript (Lenin’s real words).

When he created Travesties, Stoppard really was on fire, and this revival sparkles with his wit, theatrical verve and marvellous sense of mischief — as its title warns us, this evening will be a travesty and Wilde’s masterpiece will not escape unscathed. So while Joyce, as the business manager of The English Players, persuades the young Carr to join in the amateur theatricals, Stoppard shows how the Brit is more interested in his own wardrobe than in the play. At the same time, in the public library and in Carr’s home, all of the characters debate the meaning of art: Tzara, of course, articulates the case for an art that is anti-art, Joyce advocates the immortality of refined modernism, and Lenin argues for the social role of art in the service of the political party. Although Carr prefers the more traditional figurative and narrative arts, he engages manfully with these new ideas.

At the same time, Lenin hears that the revolution has broken out in Russia, and plots to make his way back there. Instructed by London to keep him in Zurich, Carr fails in his mission, with historic consequences, while Gwendolen and Cecily act both as secretaries or foils to the great men and as characters in Stoppard’s irresistible parody of Wilde. Meanwhile, Bennett — the consular butler — gives a speech full of Marxist theory. Despite the fact that Carr is an unreliable narrator, and these are his “senile reminiscences”, the play bubbles along as a fun evening, highly polished, highly cerebral, highly parodic and very funny if, like me, you love literary allusions and have a rather pessimistic view of humankind.

Hollander has a familiar impish charm, and switches smoothly between being the garrulous aged Carr and the smarter and more light-footed young Carr. Of the other main characters, Freddie Fox’s Tzara is best at spouting the play’s “clever nonsense”, especially as the actor has a focused and at times almost maniacal energy. Peter McDonald’s Joyce and Forbes Masson’s rather underwritten Lenin get less of a look-in, while Amy Morgan’s Gwendolen and Clare Foster’s Cecily keep up the banter and the patter with precision and finesse. It has to be said that Marber’s production, with a page-strewn set by Tim Hatley, is quite timid and restrained, enough to make you wish that he’d had a more distinctive, more unbuttoned vision. Despite that, this is a very enjoyable experience, with its Groundhog Day repeats, Shakespearean jests and sense of great questions being earnestly considered. And, in the context of Brexit, Carr’s racist remarks about the Romanian migrant Tzara sound chillingly contemporary.