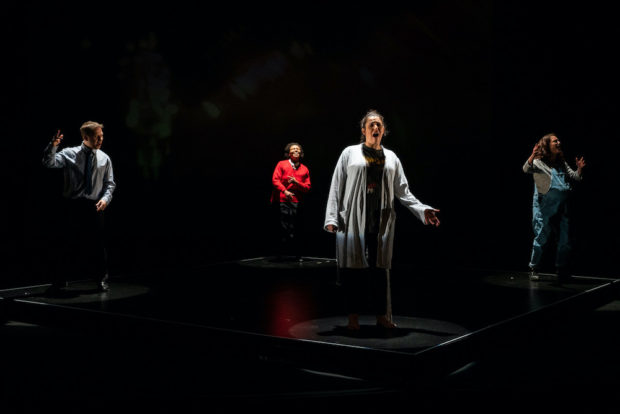 A couple of days ago I watched the live stream of Misfits, from the Queen’s Theatre Hornchurch. The show comprises four excellent fractured monologues, written by Kenny Emson, Sadie Hasler, Guleraana Mir and Anne Odeke, which focus on Essex, and collectively issue a snarl of rebuke to all those clichés about perma-tanned loadsamoney chancers and stiletto-healed sex-mad women, staples of reality shows such as Love Island, First Dates, Big Brother — and, of course, TOWIE. At the same time, all of them show how some aspects of the stereotypes — young people binge drinking and being mouthy — have an element of truth. But that’s stereotypes for you. Still, each character here is beautifully different: Daisy is about to have a baby, Eunice is doing a Black History Month presentation at school, Fiza is moving back to her parents’ home after the collapse of her marriage and Richard (aka Tag) is out on one final lash before he goes off to uni. They are complex individuals: Daisy, despite her fears, realizes that giving birth is both a beginning as well as an end; Eunice explores her present identity through history; Fiza both dreads a school reunion full of more successful contemporaries, and embraces her own achievements; Richard has a love-hate rapport with his mates. Each of these is brightly written and engaging, with a neat mix of comedy and emotional truth. Each playwright has taken great care about making their character credible and being specific in locating them in the county’s varied geography. Each monologue talks to all the others. The most original story is Eunice’s account of Joanna, who enacts the amazing tale of how, in 1908, she grabbed Southend by the eyeballs, becoming the first black woman to compete in a beauty pageant. Each of the characters are in some ways trying to get away from their past lives, each has to confront expectations about their behaviour and prejudice about who they appear to be. Part of the Queen’s Theatre’s Essex on Stage project, Misfits is directed by Emma Baggott and Douglas Rintoul, whose cast — Gemma Salter (Daisy), Anne Odeke (Eunice/Joanna), Mona Goodwin (Fiza) and Thomas Coombes (Richard) — are all tremendous. Filmed by Chris Faulkner for All Media Works, this is a superbly high-definition production which is both humorous and moving. Nice one. Warmly recommended.