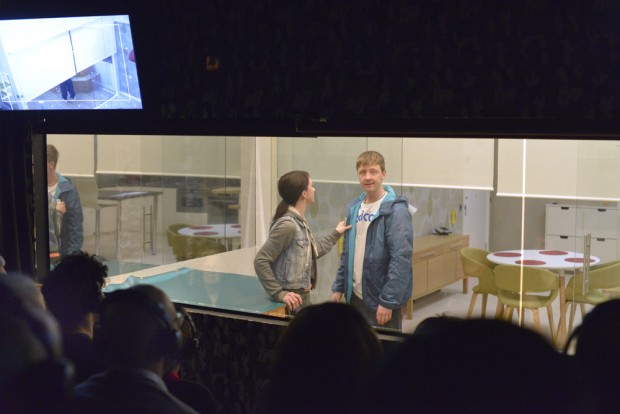 This venue is one of the coolest in London — and its regular audience is both trendy and well-heeled. In the foyer, you get jostled by a better class of person. For this immersive show, written by the prolific and ever-inventive Mike Bartlett, the audience arrives and, after getting its tickets, is divided into four groups: A, B, C and D. Each group is then summoned by tannoy to enter the theatre though a different entrance. Yes, this is not a normal theatre show — it is more of a game show.

Once inside, we are each given a set of headphones and seated on benches, which are arranged on the four sides of a newly built house somewhere near Liverpool. In front of every block of spectators is a rectangular blind, and three small CCTV screens. Are you ready? Let Game begin. The blinds rise, and we find ourselves peering through the “fourth wall” into the living room, kitchen, bedroom and bathroom of the home of a young couple, Ashley and Carly. As in Big Brother, we can see and hear everything. Just.

But how is this a game? And oh, what’s that on the screens? Customers are arriving; a warden is supervising them. He produces a gun. The customer takes the gun and shoots Ashley. He collapses. As he does so, the customer gets a score. So. It’s a live shoot ’em up. For a fee, you can pretend you’re a big game hunter, a sniper, a star trooper. The standard rate buys you a shot at the man; for an extra payment, you’re allowed to shoot the woman. Neither die; they are stunned unconscious, and eventually they get up and carry on.

More customers arrive. A party of slightly drunk girls is next; one flirts with the warden. On Wednesdays there’s a special offer: four shots for the price of one. One of the girls is celebrating her birthday and her mates have brought her this treat. It’s such fun. Especially when Ashley and Carly start having sex; shoot them when they’re doing it. Bang, the theme of voyeurism gets a direct hit. Bang, the theme of sexual violence falls. Bang, our consumer society explodes.

But why are Ashley and Carly doing this? Gradually, it emerges that they are unable to afford to buy a home because neither can find a job, so they have consented to live in this new house, knowing that for an hour or so every day they are the targets of these dubious customers. Still, it’s one way to pay the mortgage. Like two other current plays — Philip Ridley’s Radiant Vermin and Matt Hartley’s Deposit — this is clearly a response to the housing crisis. It shows what people will do when they are driven by desperation. And Bartlett has been here before: in his 2012 play, Love, Love, Love, the younger generation is paralysed by the problems of expensive renting.

What distinguishes this hour-long play from a journalistic moan about the lack of housing in Britain today is Bartlett’s skill at making his audience feel implicated in this horrible game. As in his recent Bull, the ethics of the piece are deliberately troubling. What are we actually enjoying here? It’s an entertainment, yet it feels ugly, and the ugliest truth about it is the plausible suggestion that humans do wrong not because they are evil monsters, but because they are thoughtless, lacking empathy. We do bad things not because we are bad people, but because we don’t think.

As a metaphor, Game is strong meat. It pulls the trigger on a powerful image of the society of the spectacle, and of our contemporary anxieties, about housing, about children, about family, about work, about violence. It conjures up ideas about two-way mirror snooping, paintballing, video games, and general thrill-seeking. But a metaphor is not a drama, and while this show is uncomfortable to watch, extremely unpleasant to experience, the force of this sensation shouldn’t blind us to the fact that the story is simple and there no real drama. It is more impressive as a piece of theatre-making than it is as a piece of playwriting.

In fact, it is director Sasha Wares and designer Miriam Buether who turn a slim futuristic nightmare into a nerve-tearing experience. As an immersive outing, the headphones and hard benches create feelings of isolation and discomfort. Left sealed off in our thoughts we meet the monstrous. Aided by Leo Warner’s compelling video, and good work by a cast led by Mike Noble’s Ashley, Jodie McNee’s Carly and Kevin Harvey’s warden, the company create a fearsome vision of the future that is also an acute comment on the present. Their aim is good, and they hit the right targets.