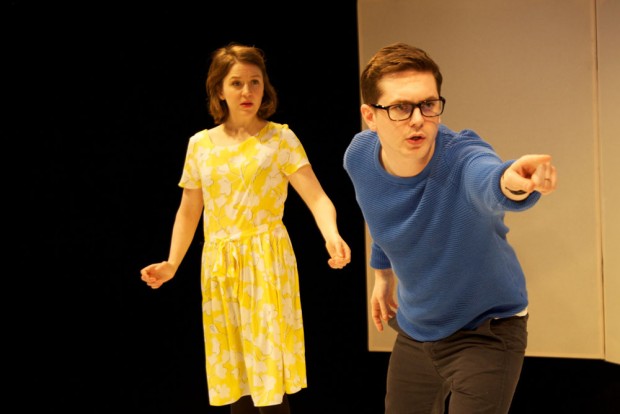 As their career progresses, playwrights face a real problem: should they please their fans by writing the same play, over and over again, or should they risk trying out new things? Polymath Philip Ridley has built up a corpus of East End gothic plays, in-yer-face shockers and dystopic visions. But he has also written female monologues and imaginative two-handers about love. His latest one breaks more new ground: it is a comedy, and — unique for this playwright — it is overtly political.

Radiant Vermin is about a young couple, Ollie and Jill. They are having their first baby and they fantasise about a new place to live, a dream home. They are, as they tell us, good people. When, with the help of Miss Dee, a contemporary fairy godmother, their desires come true, the story takes off. Starring Gemma Whelan (Yara Greyjoy in Game of Thrones) and Sean Michael Verey (from BBC Three’s Pramface) as the couple who move home for the sake of their new baby, the play is an imaginative take on the housing crisis, which is also the subject of other current plays by Mike Bartlett (Game) and Matt Hartley (Deposit).

Those who are familiar with Ridleyworld will instantly recognise the surreal dark humour of the writing and the exceptional flamboyance of the playwright’s imagination. Nothing in this story is predictable — except that it will take ever more bizarre twists and turns. Endlessly inventive, the play is nevertheless firmly rooted in Ollie and Jill’s relationship, which is sketched out in primary colours. They are everyman and everywoman, and their reactions and responses (to temptations, to neighbours, to crises) are those that anyone can identify with.

There’s a fair bit of comedy, but the laughter has a dark edge. Amid the jokes, the audience has to confront our belief in the cliché that parents will do anything, no matter what, for the sake of baby. And the play’s serious political points come not just from the play’s anger at the current housing shortage, but also from a more humanistic outrage at our indifference to suffering. Isn’t it terrible, argues Ridley, that every time we see a homeless person sleeping rough, we just pass them by? In one particularly striking passage, Whelan’s Jill brilliantly leads the audience through a whole series of various responses to the sight of someone sleeping rough.

At the same time, Radiant Vermin also develops a fantasy nightmare scenario in which Ollie and Jill discover that their own indifference to other people has enormous benefits for their living conditions. It’s a powerful symbol of any couple’s longings, and it has a troubling, very troubling, metaphorical dimension: like the inhabitants of Germany in the Nazi era, our nice couple slowly, but surely, begin to countenance the violence of a solution to the housing problem which, by the end of the 90-minute show, bears a ghastly resemblance to the Final Solution.

To implicate the audience in this gradual process, which is beautifully written in a way that emphasises its normality, Ridley has dispensed with the fourth wall, and his Ollie and Jill address the audience directly, bringing us onside. They are young, attractive and frank, and we are happy to support them, and their version of events. So when did all this first seem to be wrong, our moral instincts ask? And here is the ethical nub of the play: Ridley shows that the slide from self-interest to atrocity can be so smooth that you barely notice — until, of course, it’s too late.

Incomparable as Ridley’s imagination is, it is director David Mercatali who injects his own imaginative energy and love of clarity into a show that, on a bare stage and with no props, is subject to the merciless gaze of the spectators. He gets fabulously physical performances from Whelan and Verey as the expressive couple, and from Amanda Daniels as the charming Miss Dee. Every element of the show works perfectly, with the well-signposted birthday party from hell arriving as a suitable climax in what is an episode of bravura directing and acting. At this point, the sheer joy of the performers is wonderful to watch.

As the emotional punches follow the satirical insights, and the beauty of a vision of the city at night is but a prelude to the horrors of extreme guilt, and self-doubt, Ridleyworld is born again as place of religious miracles and communal confession. Whether because of the heartbreaking testimony of a homeless woman, or the cast’s vivid representation of the temptations of consumer capitalism (with its endless catalogues and promises), Radiant Vermin will shine brightly in my memory. One thing’s for sure: neither cardboard city, nor the local mall, will ever be the same again. Brilliant!