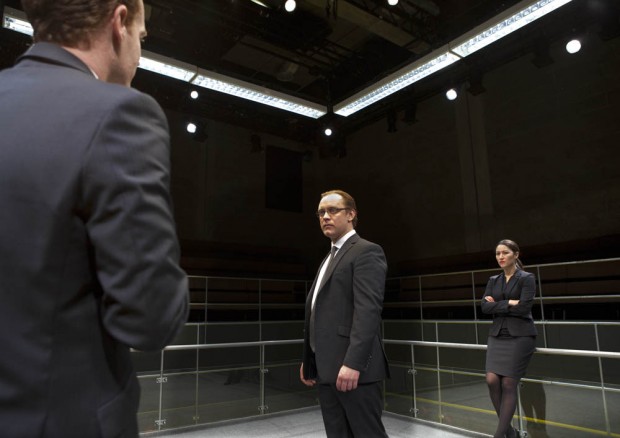 Mike Bartlett is the most prolific and talented British playwright to emerge in the past decade. Not only has he created large-scale epics in a variety of styles — from the science-fiction fable Earthquakes in London to the Shakespearean fantasy King Charles III — but he has also delivered a series of short plays — My Child, Contractions and An Intervention — in which he hones down the story into sharp shards of powerful emotion. Running at about 55 compelling minutes, Bull is one of these.

The situation is simple: as the blurb on the back cover of the play text says, “Two jobs. Three candidates.” The awkward Thomas joins high-powered Isobel and smooth-talking Tony while they wait nervously for Carter, the big boss, to arrive. They work in sales and they know that one of them is in for the chop. Like any good episode of The Apprentice, this is a time for mind games, as both Isobel and Tony undermine Thomas’s confidence by playing on his insecurities — of which there are many. But are they really, or is he just a bit paranoid?

As the play’s title suggests, this is a fight in which the bull will go down — it’s almost a blood sacrifice. But the word “bull” also suggests bullishness and high testosterone levels, and Isobel proves that she’s as much a killer as Tony or Carter. And as all the bullshit flies around, you can’t help but feel that — like in Bartlett’s 2008 play Contractions — this is a deeply felt criticism of the whole capitalist work ethic, which degrades the workers, even when they are executives, turning humans into animals. In our desperation to hang onto our jobs, we all might turn into raging bulls.

Bartlett’s main theme is bullying. As Tony and Isobel gang up on Thomas, their initially playful attitude quickly escalates into sadism. Her hatred comes on silver tongues. Cruelty arrives with a tight smile. Excruciating embarrassment hangs in the air. Authority is abused, information rationed and facts twisted. The bullies flaunt their balls; the victim ends up completely emasculated. And, being Britain, there is also a class aspect to this struggle: the bullies were privately educated; Thomas is a comprehensive-school boy.

Bartlett not only satirises the bully-boy attitudes of big business, but also the corporate language of capitalism red in tooth and nail. Carter talks about culling workforce to “save the species”, and this Social Darwinism is expressed as the survival of the fittest. Those that lose their jobs are being “downsized”; the bottom line rules. Even the corporate workforce is just a herd of animals.

Director Claire Lizzimore and designer Soutra Gilmore’s superb production is based on the strong visual metaphor of the boxing ring, beautifully stylized as a grey arena which has no props except for a water cooler, with the audience cast as complicit spectators of the contest as it unfolds in front of us. At first there is something viscerally enjoyable in watching Tony and Isobel fence with Thomas, but as they humiliate him, a knot begins to form in the stomach. Gradually, we realise what is happening: a human being is being destroyed right in front of our eyes.

Under Lizzimore’s sharp eye, the acting is forensic in its intensity: Sam Troughton’s Thomas gradually sinks under the blows delivered to his fragile self-esteem, ending up slack-jawed and moaning, while Adam James and Eleanor Matsuura seem to swell like prize fighting cocks over the course of the short drama. First staged at Sheffield’s Crucible Studio in 2013, this production now has one new cast member, with Neil Stuke as the hard boss Carter. Unflinching, unsentimental and very powerfully staged, this is a really thrilling piece of new writing.