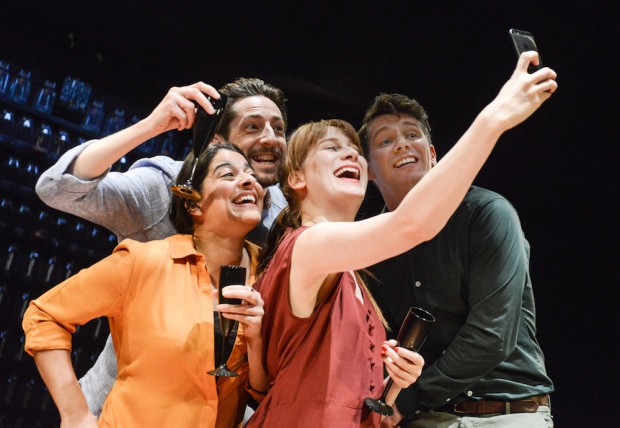 In this general election, the intergenerational conflict between youth and old age is never far from the surface. The oldies have never had it so good; the young ones are Generation Rent, crippled by debt and zero hope of owning their own homes. This aspect of the housing shortage is the subject of Matt Hartley’s play, Deposit, which was first seen at the same venue — in its downstairs studio space — in March 2015. At that time, the play had added force because it was in the company of two other plays about housing, Mike Bartlett’s Game and Philip Ridley’s Radiant Vermin. So how does Deposit look now, in the same space, two years on?

Very well actually. Hartley has cut some 10 minutes of dialogue, and the resulting 100-minute me-and-my-mates flatshare drama is sleeker and more nimble on its feet. The situation is simple: thirtysomething civil-service press officer Ben and teacher Rachel need to save money to get a deposit for a home of their own. In order to do this, they have rented a tiny London flat, which they propose to share for one year with their friends, doctor Sam and marketing officer Melanie. Rachel and Melanie have been best mates since uni so this seems like a great idea: both couples pay little rent so both can save.

But it’s not without stress. With only one bedroom, occupied by Ben and Rachel, the flat really is tiny and Sam and Melanie have to sleep on a sofa-bed in their friends’ living room. There’s no door, so little privacy. All four share the small kitchen and bathroom so the strains soon become apparent. Because both couples are saving up their money, they rarely go out so their flat becomes something of a prison, and the usual arguments about who buys the toilet paper or who empties the bin are intensified. Also, while Rachel and Melanie have known each other for ages, Ben and Sam are living together for the first time.

This means that there’s a certain competitive streak in their relationship. Sam, a junior doctor, gets a better salary than Ben, a pen-pusher. If that isn’t bad enough, Sam comes across as ambitious, self-confident and a bit strident in his opinions. As the months go by, he becomes increasing impatient with, and contemptuous of, the gentler and less dynamic Ben. When Sam and Melanie get an unexpected gift of good fortune, boosting their already superior financial situation, Rachel and Ben have to confront the bitter truth that they are getting left behind. Can friendship survive financial disparity?

London comes across as a hard place, a metropolis that is full of exciting fun (but only if you can afford it), a place of poverty (Rachel teaches kids with a range of needs) and impossible housing (without the bank of mum and dad, who can live here?). At the same time, Hartley implicitly asks why are some state workers (teachers) paid less than others (doctors), and why are civil servants paid less than private employees doing similar jobs? Are university graduates entitled to better jobs than the rest of the population, and what chance do they have of owning property in the big city?

Although the play begins a bit like a sitcom, Hartley’s writing is cleverer than it at first appears: the dialogues include the satirical use of self-serving clichés (“It’s the way it is”) and of political slogans (“We’re all in this together”). A real momentum builds up as these friendships come under pressure, and the psychological explosions are convincing and well observed. The usual tactics of evasion, belittling and passive-aggression are well employed, and Sam in particular often speaks with a sub-Tory reasonableness that barely conceals his arrogance and ambition.

Director Lisa Spirling takes the play text’s suggestion that the living situation becomes increasingly claustrophobic seriously, and her production has a lot of enjoyable movement that conveys the idea that the two couples are living on top of each other. As the space shrinks psychologically so the stage becomes a place of cramped encounters and furniture that moves ever closer together. Polly Sullivan’s design features a floor made up of pennies, while the surrounding glass shelves hold glasses and jars of small change. The cast includes Ben Addis (Ben) from the original production, and new cast members Natalie Dew (Rachel), Nicola Kavanagh (Melanie) and Karl Davies (Sam). Kavanagh’s Irish accent reminds us that London is a magnet for people from all parts. All the actors are very good, and I especially enjoyed Ben’s 35th birthday party — with the cast dancing to “Lust for Life” and “Thriller” — and the final simultaneous dialogues. The dynamic staging serves the play well, and its portrait of Generation Rent is both angry and entertaining.