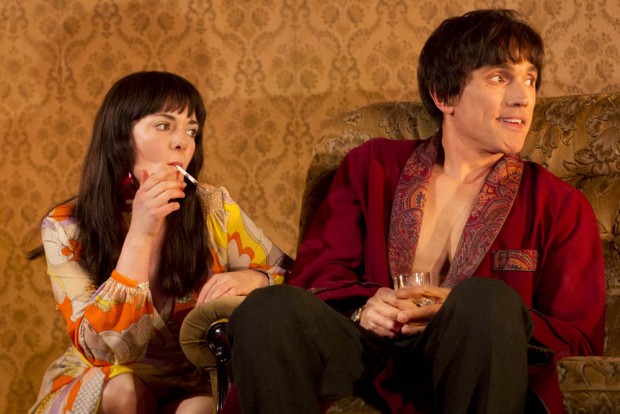 The best playwrights have an antenna-like ability to pick up, and respond to, the new conflicts and fault lines that appear in society. Over the past five or so years, the antagonism between the baby-boomer generation, who are now parents with everything, and their kids, who have nothing but debts, has increasingly intensified. This was one of the themes of James Graham’s The Whisky Taster in 2010. And no play articulates this conflict better than Mike Bartlett’s latest, which opened tonight, in a production starring Victoria Hamilton and Claire Foy.

The curtain comes up on a pair of contrasting English brothers, one young and hippyish (Kenneth) and the other much more staid (Henry). It’s June 1967, the Summer of Love. But the uneasy relationship of Henry, who works and rents the flat, and Kenneth, who is a bit of dropout, comes under increased strain when Sandra (Hamilton), Henry’s girlfriend, pops around. She’s stoned, and, to Henry’s dismay, she hits it off with his brother. The second act fast forwards to 1990, and the location is Kenneth and Sandra’s terraced home in Reading (cue a joke about regional England, twice). By now, they have two kids — the musically inclined Rose and the troubled Jamie — but the settled life doesn’t seem to suit them. For the children of the hippie 1960s and the revolutionary 1970s, normal everyday life is unsatisfying. Annoyed by the demands of their kids (played by George Rainsford and Claire Foy), the parents begin to quarrel.

The final act brings us right up-to-date. The older generation now occupies a large country house, their pensions are maturing nicely and they feel free to enjoy all the riches, emotional as well as material, of the world. But the problem is their kids. Burdened by debt, stuck in poor jobs and living in cramped housing, Rose — like most of her friends — is angry. But can she do anything about the situation?

Bartlett writes with his customary clarity and immediacy, deftly exploring the characters, and as sympathetic to the rather straitlaced Henry as to his wilder brother, as empathetic to the adventurous Sandra as to her more uncertain children. The conflict between them crackles with all of the energy of the contemporary. At the same time, Bartlett realises that in the 1960s, the generational conflict between “square” parents and their “hip” kids could also be played out — as here — between siblings and members of the same generation.

This is also a play about truth and honesty in relationships. Not only is there no love lost between Kenneth and Henry, but the growing sexual competition between Kenneth and Sandra is fuelled by their use of the idea of sexual honesty as a weapon in the sex war, with terrible results, not least for their children. Likewise, when Rose accuses her parents of being selfish and dishonest, her point comes across very strongly.

Yet the play is not without its problems. The great leaps from 1967 to 1990 to now are so breathtaking that character development, and dramatic conflict, are often sacrificed to the desire to make broader points about society. Occasionally, Bartlett’s writing meanders and there are too many repetitive lines. Yet, at his best, he does create memorable moments of domestic discomfort and family fracture. The piece, which takes its title from the Beatles’s 1967 anthem “All You Need Is Love”, was first staged in a touring production in 2010. Now recast, James Grieve’s production is often sluggish and a touch too jokey, but is saved by vivid performances from Hamilton and Foy, who recently starred in another 1960s drama, the BBC’s White Heat. Ben Miles (Kenneth) and Sam Troughton (Henry) are also just right. But Lucy Osborne’s designs are too loud, and two intervals turn the evening into a three-hour marathon, so it sometimes feels as if Grieve is hitting the audience over the head. Ouch, stop it.