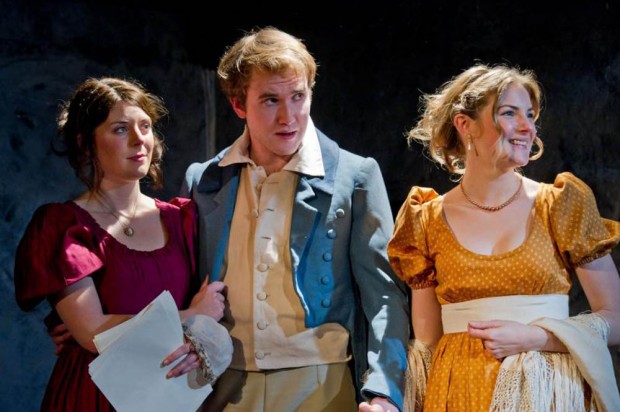 The 18th century is one of British culture’s most loved historical eras. In the long years between the reigns of William and Mary and the Regency, an image exists of a pre-industrial England, a land of pastoral bliss, of plain-speaking gentry and of aristocrats consumed by their own excesses — an uninhibited life swept away by the puritanical Victorians. It was also an era of revolution. At the moment, the theatrical 18th century is in. A revival of Alan Bennett’s 1991 history play, The Madness of George III, is dazzling audiences in the West End, helped by a great performance by David Haig, and the National Theatre has dusted off She Stoops To Conquer, Oliver Goldsmith’s 1773 warmhearted — and very English — comedy.

At the same time, the fringe is also contributing to this trend. Howard Brenton’s fascinating Bloody Poetry is a 1984 history play which looks at the relationships between the Romantic poets Percy Bysshe Shelley and George Byron, and their lovers Mary Shelley and her step-sister Claire Clairmont. The piece takes place at a time when these radicals are in exile in the aftermath of the French Revolution, away from a reactionary and mean England, a land which on the play’s first production seemed to anticipate the disappointed hopes of the leftists of 1968.

As the story treks across Europe, from Switzerland to Italy, this small group of radicals decide to try an experiment in living differently. Like the countercultural activists of the late 1960s, they try free love and excess. But the results are appalling, with the women left to bear the scars — and the death of their children is seen as a verdict on their desire to be different. The suffering of the women is a reminder of how the realities of everyday life can smash the best intentions.

Likewise, the ghost of Harriet Westbrook, Shelley’s abandoned first wife, haunts the poet, who indeed describes his whole life as a haunting. The contrast between the ascetic Shelley, who nevertheless is a visionary, and the rakish Byron, who drinks, eats and screws too much, is perfectly caught, and Brenton’s text is alive with romantic poetry as much as political radicalism. The play is a great reminder of the English radical tradition, and remains an enthralling account of the conflict between theory (the desires of Clairmont especially) and practice (the shortcomings of Shelley and Byron as regards fidelity and fatherhood).

There is an intelligent balance between representing the aspiration for a more equal society and counting the cost of the attempt. As directed by Tom Littler, this solid production has a cast led by Joe Bannister as Shelley and David Sturzaker as Byron, with Rhiannon Sommers and Joanna Christie as Mary and Claire. Most of the acting is good, and Will Reynolds’s projections evoke a sense of place very well.

The spirit of the play — which is wonderfully humorous as well as politically acute — has been faithfully and compellingly caught. In the current climate of austerity and reaction, exemplified by Jamie Lloyd’s crude and clodhopping She Stoops To Conquer at the National, Bloody Poetry seems to sing a different tune entirely. In it we can sense a real political charge and glimpse a real desire to change society. The award-winning Jermyn Street Theatre’s artistic director, Gene David Kirk, should be congratulated for reviving this brilliant piece.