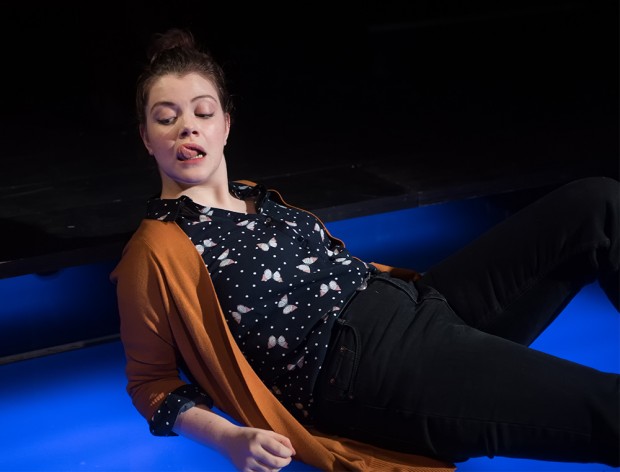 Monologues are very much the flavour of the start of this theatrical year. At the Royal Court, we have Carey Mulligan in Dennis Kelly’s brilliant Girls & Boys, coming hot on the tottering heels of Anoushka Warden’s My Mum’s a Twat, while at the Bush a season of solo plays is currently disturbing psyches with Monica Dolan’s B*easts. Now the Southwark Playhouse is staging Angry, a series of six gender-neutral monologues by Philip Ridley, a master penman who has made the solo piece very much his own. And this show stars new talents Georgie Henley (The Chronicles of Narnia) and Tyrone Huntley (Jesus Christ Superstar).

The opening piece, performed by Huntley, is called Angry and its title sums up its emotional range. As the audience files in, both actors circle one another in a small pit, sizing up each other, each staring the other down. As the thumping barrage of drums that has been pounding in the background ends, the actors confront each other: “Who you looking at?” Then “Who you fucking looking at?” Henley leaves the pit and Huntley turns his full aggression on the audience. He attacks us for watching him, and then demands if we like the film Bambi. There’s a bit of screaming and some high-voltage pacing, a radiation of hatred. It’s a kind of 1960s anti-theatre — 10 minutes of prodding and provocking the spectators.

This is followed by Henley’s return. As an American. She performs a solo piece called Okay, in which she diagnoses herself as a procrastinator, whose key words are “hesitate” and “ponder”. She dislikes being this and promises to change, but then goes back to the beginning, repeating the lines in an ever faster way until she disappears backstage, where her voice can still be heard. Protesting in the distance. The lights flash; it’s like runaway psychosis. But fun. Then Huntley comes back to perform Bloodshot, a 20-minute story about a day out in Victoria Park that begins with quotidian exchanges and ends with an erotic fantasy in which a nice person is gripped by animal passions. Lovely.

After two more very short pieces, Dancing (a disco story) and Now (a space story), Henley tells the longest and most troubling narrative — called Air — which is all about a local bookshop, a sexual attraction between a bookworm and an actor, and a blossoming love that has no time to turn sour. Because the world, which we know is full of anger, hysteria and confusion, suddenly goes mad: riots erupt, the army takes over, bombs fall, houses explode, people flee and refugees R Us. For once, British people are the asylum seekers. We know how this tale will end because Ridley shows us the narrator gasping for air in a sinking ship. It’s a grippingly sad countdown.

Despite the flashes of humour (“How’s that for ironic detachment in the face of death?”, asks the speaker), this is a dark situation which reflects the worst feelings you can have about the big picture. Global bad stuff. In this dystopia, youthful fantasy swerves away from mundane reality, but then smashes right into disaster. Over the cliff edge. At its best, the writing has a bright openness to life, which is vividly contrasted with dystopic horror. Like a nightmare, the story goes from one image to another, following a dream logic that is both transfixing and artistically surreal.

Watching this 90-minute show makes you feel as if you’ve downed several super-alcoholic drinks — and then rushed out into the freezing cold night, under the cold unfeeling stars. Yes, welcome to Ridleyland, a place of precarious uncertainty, full of comic missteps and grotesquerie. Bombs explode; children are endangered. Anything can happen. And probably has. This is a comic book world of frayed nerves, lurid visuals and extreme emotions. Your mouth is suddenly full of jagged glass. Everyone seems to be wearing the same T-shirt, the one with Munch’s Scream on its front.

These monologues have their distant origins in the pieces, like Vesper, which Ridley used to perform himself when he was an art student at St Martin’s School of Art in the mid-1980s. In fact, you can hear both his youthful voice and his more mature attitudes and technique blended together in language that is both juvenile in its imaginative vigour and adult in its essential seriousness: our world, warns Ridley, is a bad place that can easily turn into a very bad place.

Max Lindsay’s excellent production delivers the goods with a punch in the gut and a burst vein in the head. Helped by designer James Donnelly, Cassie Mitchell’s lights and Jim Whitcher’s sound, the cast takes turns to perform the monologues, one night starting with Him and the next starting with Her, and both impress with their versatility and range. Huntley’s Bloodshot shows him in perfect command of charm and intensity, while Henley (making her stage debut) performs the long Air piece with enormous verve and composure. Howling wolves! Fans of Ridley will not be disappointed.