Home » Blog » About Feathers in the Snow

About Feathers in the Snow 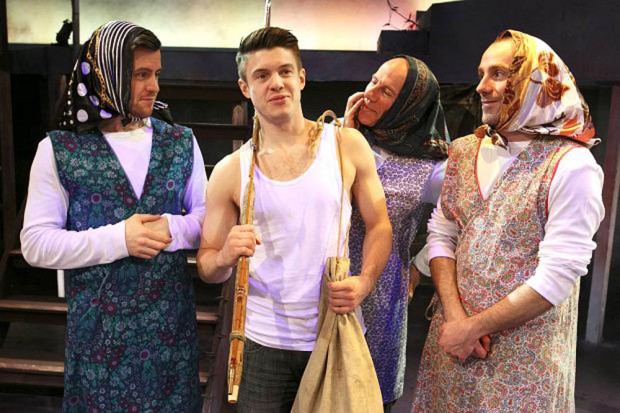 On Friday, I saw Philip Ridley’s new play, Feathers in the Snow, at the Southwark Playhouse. Wow. It stars off like one of Grimms’ fairy tales, with a young woman, Lena, having to choose between two lovers, the muscular Jared and the imaginative Stefan. Her choice of brawn over brain sparks off a series of events in which their daughter, Shylyla, is traumatised, and an epic quest to find a cure ensues. The play then morphs excitingly into an almost Biblical account of the creation of a new religion and a huge criticism of war, an activity so attractive to young men yet so devastating to everyone else. The canvas is massive, yet the storytelling is brilliantly succinct. Covering 500 years, the piece dashes around the globe and shows the effects of thermonuclear war. But the tone is light, with charming narrators and humorous moments in an imaginative tale that involves a magical Blazerbird, a lazy talking leopard, a greedy king, a tsunami, a raft, a sea witch and two historians who can’t agree. As directed by David Mercatali, and featuring a large company of young actors, this is a wonderfully freewheeling and, by the end, moving account of our longing for love and home. Cynics might decry its open-hearted idealism, or its appealing songs, but I think that this is a great demonstration that Ridley, one of our best playwrights, is not afraid to write the kind of sci-fi story that appeals to both adults and youngsters. And there are lovely performances by Deeivya Meir as Shylyla, Nelly Harker as Lena and the sea witch, and Craig Vye as Jared.