My Mum’s a Twat, Royal Court 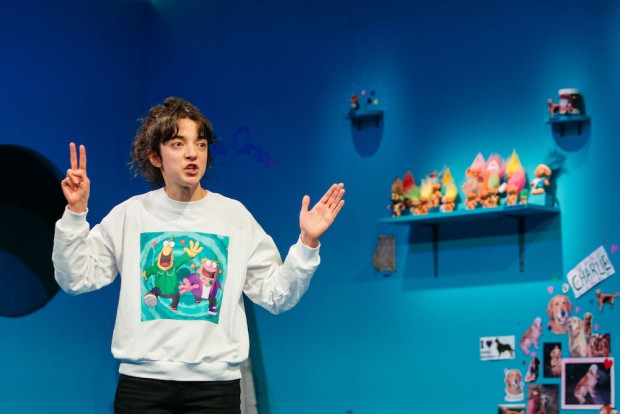 What a brilliant title! Yes, this one must be up there with the likes of Jim Cartwright’s I Licked a Slag’s Deodorant or Alan Bennett’s Kafka’s Dick. Not to mention Shopping and Fucking or The Vagina Monologues. So I was quite determined to enjoy My Mum’s a Twat, Anoushka Warden’s debut play, and the playwright — whose day job is Head of Press and Publicity at this venue — has made that very easy for me. This female monologue is so nimble and lively, so brightly written and humorous, that I was well entertained for every one of its 80 minutes. What a great way to start the year!

Billed on the play text’s title page as “An unreliable version of a true story filtered through a hazy memory and vivid imagination”, this is a short coming-of-age saga about Girl, who has a happy childhood until her mother starts acting like a twat, which mainly involves shacking up with an unsympathetic new lover, a Canadian stepfather that Girl calls the Moron, and then devoting herself to a “cult”. As puberty kicks in, Girl casts a quizzical eye over her parents’ absorption in the Heal Thyself Centre for Self-Realisation and Transcendence, a rural Somerset therapy place that uses meditation and spiritual healing techniques to help relieve the stresses of 20th-century life.

As a satire, the monologue comes alive with detail: I particularly liked the portrait of the centre’s resident guru, one Natashiralandi, whose smug self-satisfaction radiates from the text, while wafts of smelly joss sticks hang in the air. Warden understands that Mum, having lost her “sassy job” and needing counseling, was vulnerable to therapeutic solutions, but — from the point of view of a normal pre-teen — the hippie pretentiousness and repressive tolerance of what she calls the cult pulses with instinctive criticism. The story of Girl and her best friend hiding in a cupboard in the meditation room, pissing themselves with silent laughter, while the adults squat silently for a meditative hour is one of those vivid moments which stay in the mind. Yes, this is more Buddha of Suburbia than Faith Healer.

When Mum and Moron decide to set up another branch of the centre in Canada, Girl is forced to take extreme measures. In the end, like all kids, she has to do what she is told, and goes to live with her biological father in Devon for most of the year, while spending her holidays in North America. In fact, the stories of adolescence on the West Coast above Vancouver are some of the funniest and most memorable passages of writing. But among the laugh-out-loud jokes and wry humour, there’s also a dull aching pain. After all, Girl’s Mum has chosen her cult over her daughter — and while the taboo of mothers leaving their kids shouldn’t be used to beat them over the head, the play articulates what that decision feels like for the abandoned child.

But, refreshingly, this is a tale of resilience in the face of loss. And Patsy Ferran’s compellingly clear and emotionally grounded performance, which she delivers twice a night, is seductive enough to bring anyone on her side. Okay, it is a one-sided story, but Ferran’s delivery of the details — a wall chart that shows her complex relationship to her six siblings or her musical taste that uses Tupac Shakur for empowerment rather than condemnation as politically incorrect — is compellingly staged. Ferran has a mischievous puckish presence, moving around the studio space with a pixie-like alertness and grimacing to make her points. She always seems to be on her toes — ready to dance. And she has that touch of charisma that draws you into this fictionalized world.

The acting, which is both engagingly funny and sometimes moving, shows how parents appear under the rather merciless gaze of their children. Girl is a young reality check, instinctively able to detect bullshit and puncture falsity, but also obsessed like so many kids with blending in, alive to the embarrassment that parents can cause, dreading the twatishness of her family’s adults. But although this is a play about memory, brilliantly written with its comic lists and explosive use of the word “me”, it is also an example of how humour works as armour, as protection against the pain that is just beneath the surface. Yet it is also about teen female friendship and sibling solidarity: these are life savers.

Directed by Vicky Featherstone and Jude Christian, on Chloe Lamford’s set — which features photos of Girl’s dogs, her childhood hero David Jason (who she begins to hate when Moron says he loves Only Fools and Horses), and which at one lovely moment turns into a mini skunk-drying factory — the play gets a super boost from Steven Binks’s lighting and a great rap soundtrack. During an anecdote about a religious school, a nun’s stern admonition is delivered in an atmosphere drenched in hellfire red; rap music punctuates the story’s turning points. The punky excitement of the teenage years never forgets that this is a story in which feelings were once shredded and Warden’s writing manages to remind us about hatred and anger while also entertaining us without let up. My Mum’s a Twat is much more than just a bold title — it is a convincing account of turning teen pain into grown-up pleasure.