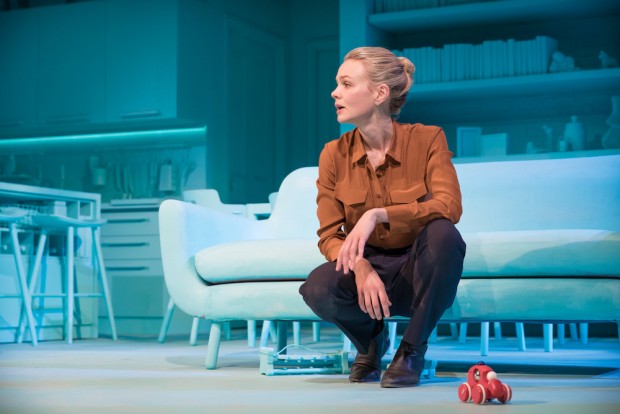 This is Carey Mulligan week. She appears, improbably enough, as a hard-nosed cop in David Hare’s BBC thriller Collateral, as well as onstage at the Royal Court in London’s Sloane Square (she’s much better live than on film). In a 90-minute monologue, written by Dennis Kelly, Mulligan explores a contemporary love story, and she is in good hands. Kelly is the wordsmith behind the edgy GCSE syllabus play DNA and The Ritual Slaughter of Gorge Mastromas, as well as the (by contrast) infinitely sweeter Matilda the Musical, so you would be forgiven for expecting a rather acerbic view of modern marriage. And you’d be right.

The solo play begins with a surprise: Mulligan’s unnamed character chats to the audience, aware of our presence, with an unmistakable Cockney accent. She begins telling the story of her marriage and her career. It starts off larky and familiar: she meets her husband-to-be in the queue to board an EasyJet flight at Naples airport, and there’s a wonderfully true digression about the attitude of Italians (in general) and Neapolitans (in particular) to queues and queuing. There are feisty anecdotes about models queue-jumping, and about the best way to talk your way into a job as, wait for it, a development executive’s assistant’s PA in documentary film-making.

The couple marry, and Mulligan’s character gets pregnant. As the staging opens out from a simple blank box, she mimes scenes from her hectic life with her children in a more domestic setting, designed by Es Devlin as a washed-out family home, its pastel colour suggesting memory, the past. At first, things look good, but gradually, slowly, this young couple’s marriage begins to go sour. When you remember that Kelly has thanked Euripides in his playtext acknowledgements, you just know that a tragedy is brewing. After all, didn’t Euripides write that one about Medea?

It has to be said that Mulligan’s character is a wonderful creation. Gutsy, funky and instantly appealing, she combines incisive intelligence with 360-degree emotional awareness. She’s direct, original and — in Mulligan’s exceptionally confident performance — absolutely magnetic. Competent, provocative and vulgar, yes, gloriously vulgar, she’s the type of working-class woman that both has a chip on her shoulder and a determination not to let that stop her from doing anything. She even comes across as a super-mum. You just long for her to succeed. And she does.

For a while — at least. As the story hurries to its ferocious conclusion you feel that Kelly has a full understanding of the human heart, both female and male, and of the world of singles as well as of couples, of the childless as well as that of parents. He comprehends joyful love and bitter loss, knows about human connection as well as marital argument, and he conveys all this with a prose that is colloquial and well-honed. His line about vicious lovers’ disputes is as powerful as a slap: “You wanted to smash their stupid teeth in with a ball-pin hammer.”

As well as being a portrait of a cocky woman, this is also — of course — a timely picture of toxic masculinity. Men, argues Kelly, are a real problem. Their need for control, to be boss, results in a world of pain. But here they are not seen as out of control, as animals, but as the opposite: obsessed with being in control. Men plan, men manipulate, men mansplain. They are capable of extreme violence. And how do you get justice for those incidents when they do their worst? And I mean worst. By contrast, women come across as examples of courage and generosity — often in the face of terrible hatred. It’s all a bit like #MeToo on HRT.

Before going down the pink path of sweet shows like Matilda the Musical and Pinocchio, Kelly made his name by exploring the theme of extreme violence in plays such as Osama the Hero and Orphans. Like Edward Bond, he is interested in where violence comes from: male DNA or social conditioning? When Mulligan’s character plays with her small children, both the little ones are shown to be capable of violence, but the younger boy gradually becomes more destructive than the older girl. Is that because he enjoys more freedom to fantasize as the youngest child, or is he just a boy slotting neatly into testosterone viciousness? With male power as a central theme, Kelly handles it with intelligence and relevance.

With its almost unbearable ending, Kelly’s play is a wonderful mix of hilarity and horror. And I do mean horror. Mulligan is simply brilliant, totally at home on stage in Lyndsey Turner’s well-paced, absorbing and finally utterly compelling production. Her freshness and vitality informs her confessional monologue with a bright honesty and detailed emotional resonance that comes alive at every turn. The audience eats from her elegant hands. Kelly’s plotting is faultless, and the piece is full of theatrical tricks that shock as well as entertain. This is the most moving play that I’ve seen for years: what does new writing perfection look like? It looks like this!