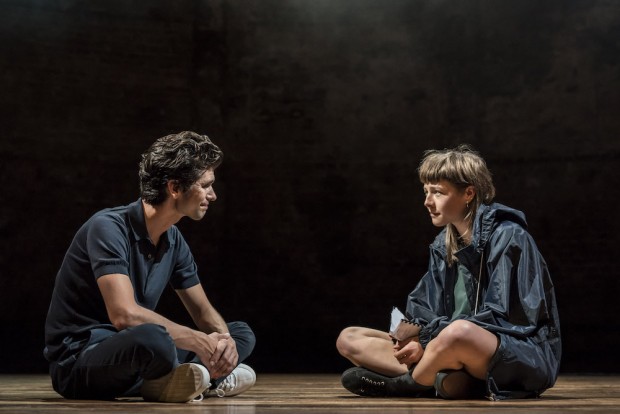 Luke is a Silicon Valley billionaire, a high-tech wizard. And he’s just had a message from God. And what does God say? Well, He says, “Go where there’s violence.” So what does Luke do? He does what he’s been told, and devotes his considerable intellect and his even more considerable resources to solving the problem of violence in our society. Okay, it sounds wildly implausible, and if Luke wasn’t being played by Ben Whishaw in this new play by the ace American penman Christopher Shinn, at the Almeida Theatre, I might not have believed it either. But he is, and so I do.

Against takes this simple idea, and runs with it. And I mean runs, not jogs, not strolls, but runs. We watch Luke visit the shell-shocked parents of a kid who has committed a school shooting, then a university where there’s been a badly handled case of sexual violence (with a brilliant satire of campus political correctness, complete with an odious professor), then a prison where he encounters the father of a child who has been abused, and then a food-packing business, part of an industrial empire called Equator (run by Jon, an entrepreneur already known to Luke). Scene follows scene in a dizzying sequence. Everywhere he goes, Luke brings his simple message: “Anytime we treat anyone with violence — we do damage to our souls.”

Luke’s quest to do good is full of great intentions. He wants people to talk more, to express more of what they are feeling, to get at the root of why there is so much viciousness in the world. But everywhere he runs into problems, and everywhere he finds blind alleys. The former best friend of a school shooter feels burdened with guilt because he rejected the boy, who was then lonely and a misfit. Many victims are too traumatised to speak, or to change the way things are. Some refuse to speak. And there are many, many who just want to talk to Luke, who rapidly becomes a Christ-like figure, a magnet to the dispossessed and the needy.

In the first half of a three-hour evening a lot of this is predictable and unsurprising, but the momentum picks up in the second half. Luke gradually appears to be more Jesus-like than ever, not just in his ability to work minor miracles (making a broken watch work again) and to inspire millions (he becomes a mega celebrity), but in his sexlessness. As the play’s love interest, Luke’s collaborator Sheila, points out, “Jesus didn’t fuck.” And the suppressed erotic tension between these two gives the story an emotional undertow, and grounds Whishaw’s performance very much in a classic will-he-won’t-he? mode.

As you’d expect, Whishaw rules the stage. He conveys immediately the lonely sincerity of a man possessed by a great vision, a genius with an idée fixe. As an actor, he exudes a kind of armoured niceness, an aura of sainthood, a careful magnetism that is also a complete closure to intimacy. At certain moments, almost inadvertently, Whishaw raises two fingers in a gesture reminiscent of Byzantine religious paintings. Yes, as he meets the poor and the troubled, the meek and the sinners, he is that close to blessing them. Then, in the second half, you can feel the gradual thaw that comes over his body: he begins to loosen up. This is especially apparent in the scenes when he revisits his childhood home.

The beautiful thing about this play is not only its portrait of Luke as a present-day Jesus, but also the tender and tentative way in which it shows how people struggle to connect. It illustrates the emotional blocks, the deep uncertainties and how the weight of the past burdens the present. Whenever any character reaches out, you feel a sudden rush of recognition and of affection. This is a play as much about intimacy as about violence. Everyone in the play is hurting, and needy, and most of them know it. It really is very touching.

This is also a play about ideas, and it’s hard to summarize the wealth of cerebration going on here. As well the scathing satire on political correctness in American colleges, Shinn is particularly critical of the kind of contemporary radical thinking that sees violence everywhere, and sees all types of violence (whether physical or verbal) as equivalent. The scenes set on the campus offer plenty of examples of a species of excruciating leftist over-thinking that leads nowhere. At the same time, Luke’s gradual realisation that he is not immune to violence, and that his mission needs to be radically revised, that what is required is a total revolution in behaviour, raises big issues that are probably impossible to resolve.

In one campus scene, the student’s creative writing professor worries about the politics in her work. Like the professor, I was sometimes unsure about the politics of Against. Luke wants to change the world, but he encounters only obstacles. He talks to junkies, but doesn’t change them much. In the tension between hope and no escape, the second gets a better deal here. Occasionally, there’s a sense of a small victory, a little ripple from the rocks Luke throws into the pool, but is this enough? As with the New Testament, we all know how the story of the prophet will end, and Shinn even offers a suggestion of a metaphoric secular Resurrection. But the much-longed for (by me!) Rosebud moment never materializes.

So Against is not an easy play to like. Apart from Sheila, most of the other characters are just sketched in, in what is very much the gospel according to Luke. The reprise of a satirical scene between a creative writing student and her professor in the second half is unnecessary, and slows things down. And some of the best situations, such as the packing factory with its workers and creepy supervisor, almost cry out for a play of their own.

Still, there is much to enjoy in Ian Rickson’s sensitive and often delicate production. On Ultz’s bare wooden flooring with a minimum of props, Whishaw propels the action, and his quiet energy is well supported by the rest of a large ensemble cast. So lots of praise to Amanda Hale (Sheila), Kevin Harvey (Jon/professor odious), Emma D’Arcy (student), and the three factory personnel: Elliot Barnes-Worrell, Adelle Leonce and Martin McDougall. Nancy Crane and Naomi Wirthner play six incidental roles. Okay, it’s a bit of a baggy monster of a play, but it has some marvellous moments of wry humour and acute emotional insight. It’s one of the best examples of new writing at present on the London stage.