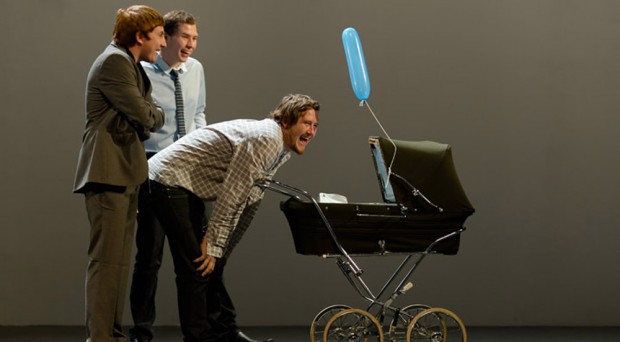 Director Sean Holmes has given me immense pleasure simply by his choice of plays: John Arden’s Serjeant Musgrave’s Dance, Sarah Kane’s Cleansed and Blasted, and now Edward Bond’s Saved. I saw Saved last night at the Lyric Hammersmith and was struck, as I expected to be, by its visceral power and the sheer beauty of its muscular language. Likewise, and not surprisingly, the baby stoning scene reduced the audience to a cold quiet, punctuated by shocked gasps. But this terrible incident is, when you watch the whole play, not as important as its legendary status suggests. What is much more important is Bond’s conception of family life as shown by the succession of scenes set in the living room. These are written in different emotional keys: lust, despair, desperation and, finally, a kind of exhausted resignation. The last scene is a study in silence: despite what Bond says, I felt exhausted, but not that anyone had been saved. Here, family life is a boarding house where all members are both hosts and lodgers. It is fuelled by a palpable fury against the poverty of everyday life. What’s particularly striking about this play is how a work of genius makes our usual categories of comprehension so feeble. We call plays relevant, but this is such an inadequate word for Saved; we call plays state-of-the-nation, but this is plainly weak: Saved is a report on modern humanity, it’s about Oedipus in south London. It also exists in a parallel universe to the historical mid-1960s, when it was written: the television is on, but no programmes are recognisable; a radio plays, but not a pirate station; a jukebox is used, but not for the Beatles or the Rolling Stones. No, the play is much bigger than its time: it’s a jewel on the ragged necklace of new writing that stretches from Beckett and Pinter to Cartwright, Crimp and Kane. This is the most important revival of the year. Do not miss it.