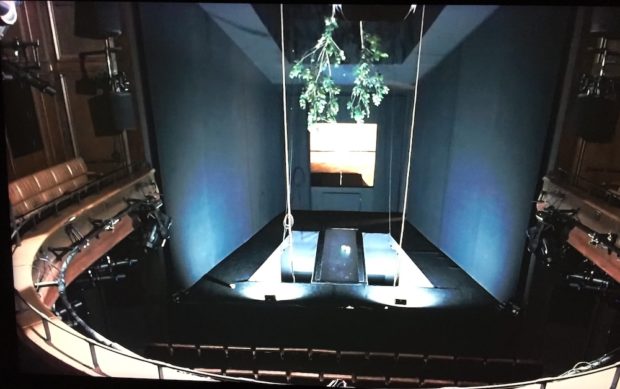 We are living, I have frequently been told, through weird times. Maybe. But do weird times necessarily require weird art? Do bad time provoke bad art? Well, one of the weirdest of weird responses to the pandemic can now be found on the Royal Court theatre’s website. It is called Caretaker and it’s a durational installation by Hester Chillingworth, which has been streaming live since 7:30pm on Friday 8 May 2020, the anniversary not only of VE Day but also of the first performance of John Osborne’s Look Back in Anger in 1956. The text on the website tries hard to be alluring: “Are you longing for some space and a few words of encouragement right now?” Maybe, but why would I visit a theatre website to find that? This installation is hyped as an imperious offer: “witty, playful and supportive audio messages will intermittently be broadcast; more often, there will be silence. No productivity is demanded. Nothing needs to happen and nothing is expected of you. You are, after all, already doing really well.” Am I? How would you know? The actual installation is a view of the Court’s main stage from the balcony, showing Chloe Lamford’s set for EV Crowe’s Shoe Lady, which was running when the theatre was forced to close. As a piece of conceptual art it is easy to understand: you can look at the set, see — if you are lucky — the lights dim down to darkness and then come up again. Occasionally, a voice barks at you: “It’s good to be lazy — take care.” Um. So witty, playful and supportive. While this could be a good screen saver or a zoom background, it is hardly an inspiring art work. But it does have a pedigree. It is reminiscent of Martin Creed’s Work No. 227: The lights going on and off, which did precisely that for the Turner Prize in 2001. Like Caretaker, it was deeply uninteresting. It also reminds me of an incident from the long history of bad art: in Andy Warhol’s Empire, an eight-hour slow-motion film of the Empire State Building, which was shown to coterie audiences all over the world from 1964 onwards. Clever spectators walked out early; others stayed for hours. Substance dissolves into style. What none of them did was to tell the queue of prospective punters that it was stupid event — intellectuals really are a hopeless lot. My feelings about Caretaker can easily be summed up: in the words of Johnny Rotten of the Sex Pistols, “Ever get the feeling you’ve been cheated? Good night!”