Home » Blog » About What the Butler Saw

About What the Butler Saw 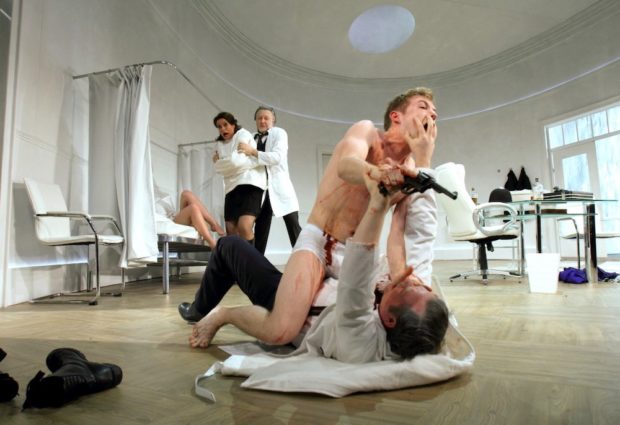 Over the past couple of months, theatre reviewing has become film reviewing, and venues all over the country have struggled to make material available for watching online. The biggest institutions, such as the National Theatre and the Royal Shakespeare Company, have the resources to stream beautifully filmed versions of some of their best work. Elsewhere one or two key productions, such as the Royal Court’s Cyprus Avenue, provide a reminder of powerful stagings. Other companies, such as Creation Theatre in Oxford, are pioneering live online shows which include real-time audiences. But what about the rest? One good example of the generosity of theatres in this time of trouble is the Curve Leicester’s decision to make available material from its archives. The show that caught my attention is its 2017 production of Joe Orton’s 1969 classic, What the Butler Saw. Co-produced with the Theatre Royal Bath, this is directed by Nikolai Foster, and was performed a commemorative 50 years after the Leicester playwright’s death. The recording was originally made on 3 March 2017 for the venue’s archive and was never intended for public broadcast. It’s filmed on a single camera at the back of the auditorium, and subtitles help viewers enjoy the playwright’s acid wit and wisdom. Despite its age, the play is wonderfully fresh and its fizzy ideas about sex and gender are as provocative as ever. In the light of the current coronavirus pandemic its satirical view of the medical profession and public health are grimly hilarious. As is the material about abuse, assault, porn and incest. And as for the jokes about religion, they remain as delicious as ever. In this case, bad taste is not only badder, but also reveals our current anxieties. A very familiar picture of Britain emerges: a country where figures of power are both abusive and senseless, and in which elaborate and empty logic is used to justify the silliest, or the saddest, behaviour. Yes, this is us alright. Foster directs at a cracking pace, on Michael Taylor’s sparsely modernist, white and aptly clinical set. With an excellent cast led by Rufus Hound as Dr Prentice and Jasper Britton as Dr Rance, this farce is suitably anarchic and Orton’s subversive dialogues retain their acerbic anti-authoritarian qualities. The comic timing is perfect, and so is the great support from Catherine Russell as Mrs Prentice and Dakota Blue Edwards as Geraldine Barclay. Despite the risk of making public an archive resource which was never designed to entertain a wide audience, this is a good reminder of a modern classic. The escalating action, with its furious clowning and dazzling writing, remains a genuine delight. It’s 100 minutes of sheer fun!