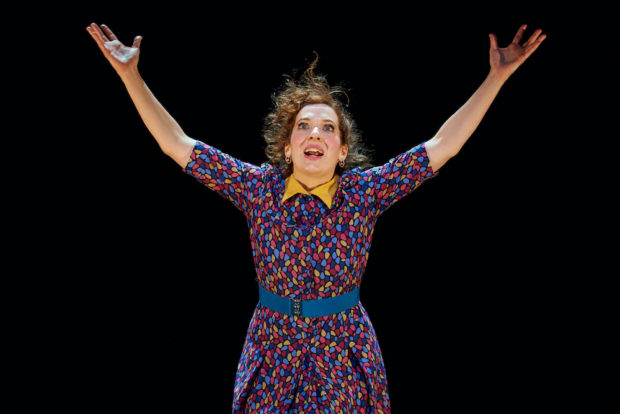 On my way to review this show, I see an urban fox. Before I can take a photo, it scrambles away. And I’m sure that, as it goes, it winks at me. This weird moment is a great prologue to EV Crowe’s new play, which is virtually a monologue starring Katherine Parkinson — it’s a weird piece, and then some. And then some more. Although it is very short, at just over an hour long, it is a powerful account of female middle-class anxieties in Britain today. A classic Royal Court play, it is directed by this venue’s artistic director Vicky Featherstone.

The story, such as it is, starts with Viv, a typical middle-class mother who works as an estate agent in London, and lives with her husband Kenny and Child. She introduces us to her oh-so-familiar world: getting up, fixing breakfast, opening a dodgy curtain to reveal a sunny day, and doing the school run. On her way to work, on the tube, she loses her right shoe. The rest of the absurdist monologue explores her reaction to this incident, from reporting the loss to the police to stealing a new pair from a branch of Russell & Bromley. As she hobbles from one incident to another, meeting a homeless woman called Elaine on the way, she gets increasingly desperate.

This symbolic, Beckettian situation, involves typical middle-class angst, with a nice streak of intense exaggeration: what will my work colleagues think if I turn up with a bloodied foot? How long can I continue limping on one shoe? When is it okay to give up, and return home? The shoe symbolism is very effective because this affects the way you walk, the way you move. At one point, Viv puts on a pair of men’s shoes and suddenly stands so much taller. Pity they are too big for her feet. Her bloodied foot is a symbol of fragility and her relations with every other woman she meets are mediated by footwear. She painfully struggles to fit, Cinderella-like, into new pairs. Like a bizarre episode of Desperate Housewives, the image of a footsore woman evokes human anguish. By the end, Viv is spiralling into depression.

What starts as a comedy slowly shades into a nightmare. Viv’s insistence that she is basically a good person is balanced by her declaration that it takes real guts to be a middle-class woman. In one farcical episode she has a fight with Elaine: when the chips are down, the suburban classes can be ruthless. Crowe’s writing is spare and poetic, with repetitions and sudden psychological insights. It has a musical quality which works well with Parkinson’s nasal intonation. The repeated image of a package that contains nothing suggests an existential bleakness, and the piece’s talking and caressing curtain and chatty tree have a surreal power. It’s not the most involving play in the world, but it does have an evocative resonance.

But although it’s easy to see Crowe’s point about how young professional women now have less material comforts and security than a generation ago, it does feel a bit rich to suggest that these economic insecurities have a symbolic value that elevates them to the level of existential discomfort. Of course, any individual can feel and experience bad times, bad thoughts and bad situations, but the exquisite subjectivity of this monologue should not blind us to its special pleading. If there are huge social injustices in Britain today, the condition of dissatisfied estate agents and suburban mums surely does not rank very high in the anger stakes. It’s a bit like saying that playwrights are an oppressed minority. Or urban foxes.

Parkinson — a very familiar face and voice from television’s Humans and Defending the Guilty — is excellent. She travels from querulous alienation to a manic desperation as audience laughs are quickly stifled by gulps of disquiet. Viv comes across as masochistic and increasingly lacking in self-esteem. Occasionally compelling, Featherstone’s production, tightly designed by Chloe Lamford, features a moving carousel and a foot that becomes ever-more bloody. There are lovingly still stage pictures and energetic moments of song and dance. Parkinson is well supported by Tom Kanji (Kenny/Curtain) and Kayla Meikle (Elaine) and the Child role is shared by Archer Brandon and Beatrice White (on press night, Brandon made his stage debut). Yet, however vivid, this is yet another rather slender play that would be better as one half of a double bill rather than as the main event.