Home » Blog » About The Empire 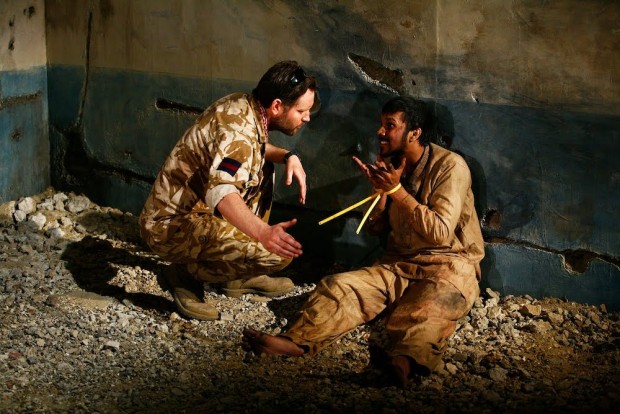 Sometimes the spirit of the times is expressed in a single word: this month, as the nation slumbers in the middle of a general election campaign, that word is “posh”. Not only is it the title of Laura Wade’s play, but it is also used repeatedly in DC Moore’s The Empire, a play staged at the Royal Court Upstairs (and which I saw last night). Posh is a pretty hot word nowadays — provocative because of all the fuss about Cameron and his cronies being public-school toffs — and so these dramas seem to take the temperature of the times. The Empire is a scorching 90-minute real-time drama that explores the attitudes of both the British soldiers serving in Helmand Province, and offers an insight into the mentality of those who oppose them. Here the legacy of the disappearance of the imperial past is the main subject. After a skirmish in which the British forces, supported by the Afghan National Army, have sustained some casualties, Lance Corporal Gary finds himself looking after a battlefield prisoner named Zia. But when Gary discovers that his charge is a British citizen, his commanding officer Simon orders him to be taken to the HQ. Gary — whose mate has just been killed — has other ideas. In Mike Bradwell’s forceful production, on Bob Bailey’s blindingly hot set, the class issue comes to the fore in the relationship between Gary and Simon, a public schoolboy whose right to rule is challenged by both Zia and Gary. Much of the tension of this taut and thrilling play depends on the tough and credible performances of Joe Armstrong (Gary), Rufus Wright (Simon) and Nav Sidhu (Zia), who may or may not be innocent. Sitting in the audience of this convincing war play feels like you’re watching a low-burning fuse while being in the sights of a high-powered sniper rifle.