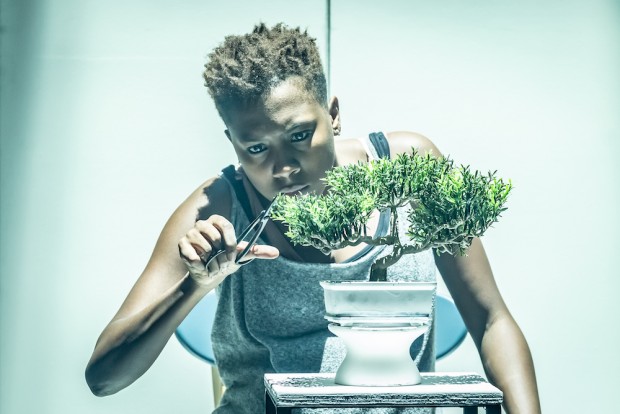 Contemporary British theatre loves time travel — and not just to the past. It also enjoys imagining the future, especially the bad stuff ahead. So Ella Road’s debut play, The Phlebotomist, is set in a convincingly coherent future-set dystopia where genetic profiling reigns supreme, and one blood test can fuck up all your life chances. First staged at the Hampstead Theatre’s Downstairs studio space last year, the play has been well reviewed and nominated both for an Olivier Award and for the Susan Smith Blackburn Prize. But how does it look on this venue’s main stage?

Road’s Brave New World is one in which a simple blood test can predict if and when you will develop a disease. As well as foreseeing some behavioural traits, such as a tendency to break rules, or a propensity to develop depression. Okay, this initial premise will be vigorously contested by anyone who knows about genetics and psychology, but if you accept it then the rest of the play develops like a thriller in which blood tests give individuals a rating, which determines their social status. High means you get a good job; low means you don’t. To get insurance you need a good rating; to use a dating site, you need a good rating. And your kids will be rated too. You don’t have to have a rating, but if you don’t it looks pretty suspicious.

In this Big Brotherish nightmare context, Bea, a twentysomething phlebotomist who takes her patients’ blood for the all-important tests, falls in love with Aaron, training to be a barrister, when they meet at the hospital where she works. Their ratings look good: he’s a 9.1 and she is a 7.2. But what about the ratings of their mates? When Char, Bea’s friend, asks her to help her fake her ratings, the moral issues of the play come into their own.  The ethical content of the piece may not be very original, but it is all elegantly delivered. The central question, as ever, is: do we really want to know about our own future? Is it better to remain ignorant? How does such knowledge affect our opinion of other people? And of ourselves?

As the years pass, Bea and Aaron’s love story develops in a society where the ratings system, with its clear indication of a new class distinction based on biology, is convulsed by increasingly violent disruptions. Large video screens give us a peek at the wider world outside this couple’s life; and at events that seem to spiral out of control. With some very disturbing results. At the same time, Road stresses the role of chance, and of free will. Knowing the truth about your genetic make-up can either provoke a creative change in your life circumstances, or, on the other hand, a psychological collapse. Like roulette, you can’t predict every outcome.

The playwright also stresses that in a world dedicated to eugenic perfection, a notion that she satirises with intelligence and imagination, people will still stubbornly love the imperfections of other humans. They will care for the bad ones; love the outcasts. Some will simply refuse to know what their genetic code is; others will fake the results of tests. There’s something quietly inspiring about this message, which like DNA itself reproduces itself in various guises throughout the story. So while the perfect society disapproves of everything that is unpredictable, such as alcohol or drugs or gambling, there will always be humans who resist.

Road’s writing is beautifully controlled and quite subtle. This Black Mirror world is one of scarcity: there are hints about how fruit is a luxury, and expensively rare. She also creates a new prejudice, rate-ism, which is like current racism, and shows how the perfect society, like any repressive system, fosters lies and deceit, which seep into our most intimate moments. She even adds a random character — David the humble hospital caretaker — whose life choices are an ironic counterpart to those of the high-flying and aspirational Bea, Aaron and Char. Taken together, all these elements allow the play to power along to its chilling conclusion.

All this is powerfully realised in Sam Yates’s vivid and well-focused production, on designer Rosanna Vize’s clinically perfect set, which gradually falls apart as the story develops. As the mess accumulates, Jade Anouka gives an energetic and charismatic performance as Bea, which is neatly balanced by Rory Fleck Byrne’s charming and troubled Aaron. Likewise, Kiza Deen’s journey as Char is clearly and movingly drawn, while Mark Lambert’s David is calm amid the storms. The central love story is emotionally convincing, and Louise Roades-Brown’s videos contribute a lot to the powerful effect of this dystopia. If some of the plot detail is questionable, especially the credibility of the first and last scenes, there’s no denying the play’s relevance: our disgust with this picture of an eugenics-obsessed society is somewhat tempered by the fact that over-the-counter DNA testing devices are already available today. What a thought-provoking evening!