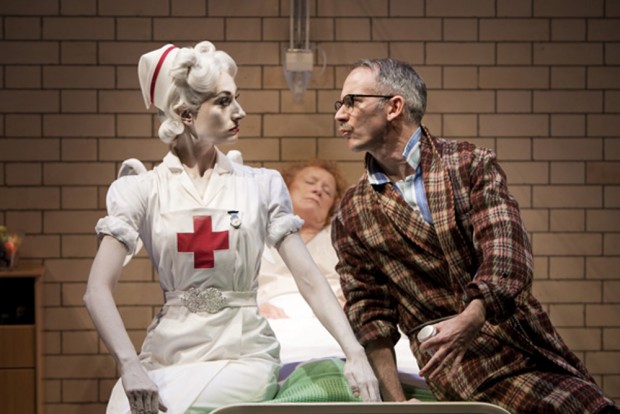 Okay, now that you’re a citizen of Dystopia, and you’ve reached the regulation old age, it’s time to check into an approved care home. Please enter the Ark, and take your allotted bed. A government official will be with you in due course. Yes, that’s right, just take those pills and you will be fine. Will you be expecting visitors? Okay. Any problems, just ask Nurse. In Tamsin Oglesby’s satirical new drama, which opened tonight at the National Theatre’s Cottesloe space, the biblically named Ark is not a means of salvation, but an instrument of euthanasia.

We start with a family which, in its complexity and chaos, seems to mirror contemporary life. So far, so good. When OAP Lyn begins to lose her memory, and then acts erratically, her brother Robbie and her daughter Cathy decide to put her into a care home. Add Lyn’s sister Alice, plus Alice’s grandson Dylan, plus Millie, Lyn’s 16-year-old adopted granddaughter, and you can appreciate that it takes Oglesby a while to introduce her characters.

Then things get really complicated. Lyn’s care home turns out to be a hospital, where Alice also ends up after a fall, and Millie suddenly announces that she is pregnant. Next, and equally suddenly, Oglesby’s play morphs from a family drama into a sci-fi dystopia. The Ark is not just a hospital, but an Orwellian institution where research scientists, led by the sinister Monroe, are experimenting on how to cope with the elderly by using a variety of medicines, most of which have disturbing side effects. Like death.

In this grim hospital, each patient is assigned a robot nurse. Lyn gets Mimi, a cheerful but utterly vacant mannequin who responds only to outside stimuli and whose mechanical gestures are a parody of human movement. Like a glorified cat, Mimi is at her best when she is stroked or petted. Sudden noise or anger only repels her. But at least she’s company.

Caring for the aged, and the horrors of Alzheimer’s, are both hot subjects, but the problems of old age seem to carry the whiff of depression, so how does Oglesby make her story entertaining? At first, she mixes acute one-liners with a playful attitude to a serious subject, and this beguiling combination promises to be both informative and amusing. The adsurdism of the sci-fi strand, exemplified by Paul Ritter’s rasping performance as the monomaniacal Monroe, contrasts well with the aching pain of the family story.

Likewise, the scenes in which the hospitalized Lyn talks to the robotic Mimi deliver a good comparison between the real distress of the human and the programmed fake empathy of the machine. Then things get shaky. And even Anna Mackmin’s spirited direction, on designer Lez Brotherston’s split-level set, can’t make perfect sense of the accumulating ideas that Oglesby throws at the audience. For as well as Alzheimer’s, and care for the elderly, the play examines issues such as euthanasia, motherhood, family and identity. All in barely two hours.

Despite some diverting video projections, designed by Mark Grimmer and Lysander Ashton, and some solid performances from Judy Parfitt as Lyn, Marcia Warren as Alice, Gawn Grainger as Robbie and Amelia Bullmore as Cathy, the mounting toll of loose ends and odd switches in tone become increasingly perplexing. And annoying. What you remember is a superb performance by Michela Meazza as Mimi, all buzzing robotic gestures, jerky movements and insinuating smiles. Somehow the strength of this acting suggests that, in a play crammed so full of issues, there’s a certain soullessness at the heart of the story. When a play’s best moments involve a megalomaniac and a robot, you just know that something is, like, very wrong.