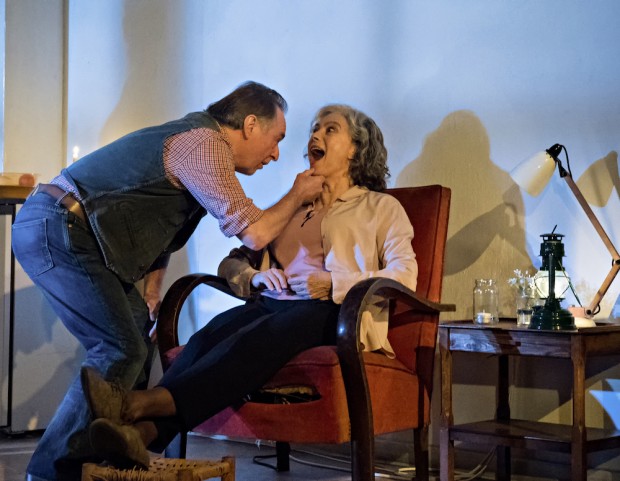 Over the past decade, one new theme in particular has emerged in contemporary British new writing: generational conflict. In several bright new offerings — such as James Graham’s The Whisky Taster (2010) and Mike Bartlett’s Love, Love, Love (2012) — the baby boomers are condemned for having a cushy lifestyle while their kids, the millennials, are having a hard time (indebted, homeless and underemployed). Play after play asks: will the new generation ever enjoy the same living standards as their parents? Lucy Kirkwood’s latest, a follow up to her big 2013 hit Chimerica, is the newest, rather offbeat, addition to this debate.

The Children is set entirely in a cottage on the East coast of England, in the wake of a Fukushima-like nuclear power plant disaster. It focuses on a baby-boomer couple, Robin and Hazel, who are now in their 60s and retired from their jobs as nuclear scientists. The reactor which has malfunctioned is a cab ride from their doorstep, and they have embraced a simpler lifestyle — growing their own vegetables and doing yoga — in a world of power cuts and other disruptions. An old farm, where they retired before the disaster, is inside the exclusion zone which has been thrown around the reactor. They have four grown-up children, who have left home. The story starts when Rose, who was once one of their colleagues, arrives at their door. Since they haven’t seen each other for 30-odd years, what does she want?

You don’t have to be a scientist to enjoy this show: it doesn’t take much to work out that one man and two women with a shared past equals a love triangle, and pretty soon this is exactly the situation facing us. Or is it? Why has Rose decided to visit Robin and Hazel so soon after the nuclear disaster? Gradually, and it would be a massive spoiler to say any more, the real reason for her interest in them becomes clear, and her request is very strange indeed. What began as a comedy of manners, with laughs aplenty, eventually starts, like the setting summer sun, to glow with a much more sinister hue. As darkness falls, the subject of old age and death strides centre stage.

Kirkwood neatly satirizes some of the absurdities of these aging baby boomers: the parsnip wine, the healthy salads, the organic smallholding, and the sloganising (“If you’re not going to grow, don’t live”). But her best throw is the use of the image of the nuclear power station as a metaphor for the older generation: it brings life, but it is also potentially a fatal use of scarce resources. But the play’s central idea of a heroic, if suicidal, gesture by the oldies is both original and a strain on credibility. And although Robin and Hazel’s children remain offstage, they are constantly in their parents’ thoughts, especially the problematic first-born Lauren (who Rose knew as a small child). Frustratingly, we find out too little about her “anger” and her point of view.

It is a dense play, with issues of responsibility for the spoliation of the planet, and of different degrees of privilege (financial, marital, parental) popping up like daisies in the unkempt coastal dunes of humour. Much of this is thoughtful as well as funny, despite the gaps in the backstory (for example, a lot is made of the fact that Rose seems to know her way around the cottage, but this never results in a dramatic confrontation). Perhaps Kirkwood is being too subtle for her own good, but puzzling the audience is not a good tactic. So while the play does say plenty about how parents live for their children, and maybe even against their children, it never says it loudly enough for my taste.

James Macdonald’s production is atmospheric and meditative, thanks to Miriam Buether’s claustrophobic design and Peter Mumford’s lighting, making the play something of a companion piece to Caryl Churchill’s Escaped Alone, which returns to this venue in January. Despite some dips in energy, and a painfully inconclusive ending, there is much to enjoy here, with good performances from Deborah Findlay as the motherly Hazel, Francesca Annis as the ice queen Rose and Ron Cook as the down-at-heel, denim-wearing Lothario, Robin. The dance sequence (thank you, James Brown) is wonderful, but the autumnal tone of the piece, and its leisurely pace, still needs improving.