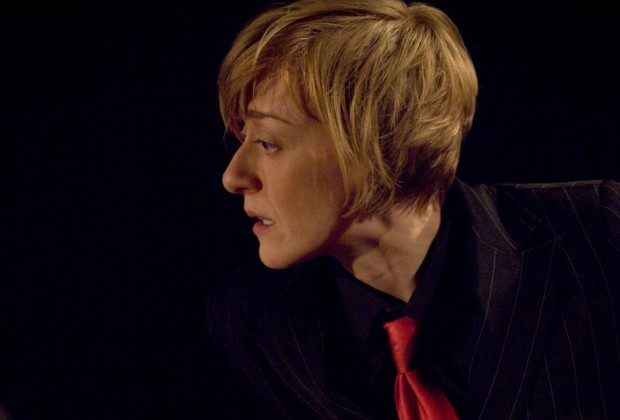 Christopher Haydon’s inaugural production as the new artistic director of this venue is Lorne Campbell and Sandy Grierson’s Tenet, whose full subtitle is A True Story about the Revolutionary Politics of Telling the Truth about Truth as Edited by Someone Who Is not Julian Assange in Any Literal Sense, and it is part of a season whose title is the incendiary admonition Resist!. But does the show live up to the billing?

Tenet is political theatre, but maybe not as we have hitherto known it. Created by the highly inventive Greyscale theatre company, it brings together two radical activists, the 19th-century French mathematician Evariste Galois and our present century’s Wikileaks founder, Julian Assange, in a postmodern entertainment.

The main story is that of Galois, a child prodigy who was born in 1811. Early on, he not only showed a genius for maths, but also an interest in revolutionary politics. Despite a rejection from the Ecole Polytechnique, he carried on working, but then in 1830 got involved in one of the many French revolutions, being arrested and imprisoned. Then, as a result of an obscure quarrel, he was killed in a duel in 1832.

On a bright red space, designed by Garance Marneur, Lorne Campbell’s hour-long production makes good use of a blackboard, a whiteboard and a little model set. Performers Jon Foster (Galois) and Lucy Ellinson (Assange) tell the story, teasing out the similarities between the word radical as a mathematical function and radical as a political stance.

At the start, after “La Marseillaise” blares out, the audience is counted, and a quiet complicity is established between us the audience above a pub and the 19th-centry politicos who assembled in a room behind a Parisian bookshop to plot social change. Partly a lecture, partly a quiet chat, partly an impassioned rant, this is an immersive theatre event that depends on our willingness to be tantilised. As an exploration of ideas about truth and the human ability to change the situation, the show tiptoes, and occasionally staggers, along the thin line between the intriguing and the banal. Typically, many questions are asked, and random provocative comments thrown out, but few answers given. That, of course, is the point.

But although the life of Galois is not without interest, the addition of a few minutes which reconstruct the extradition hearing of Assange do tend to pad out the proceedings, but for me fail to unlock the rather dense speculation of the previous passages. On the plus side, Foster has a rugged appeal and Ellinson a cool command — and their interaction is empathetic and entertaining.

The improvisations and the audience participation are well handled. But despite the small pleasurable moments, which include the tea and biscuits on offer and the charm of the whole enterprise, to me the short evening felt a bit like a rather inconsequential ramble, lacking in dramatic interest and concluding with a trite advocacy of process. Neither the writing of Lorne Campbell and Sandy Greirson, some of which repeats what has already been seen in 2011’s Theatre Brothel, nor the confidence of Foster and Ellinson are enough. In the end, what we get is a snack rather than a full meal.