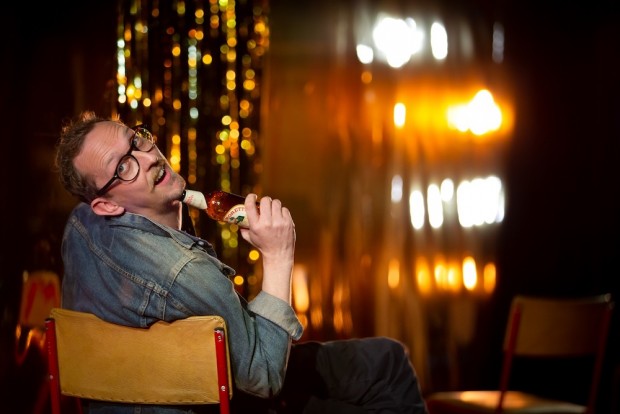 Adaptation is too banal a word to describe the cross-fertilization of theatre and other art forms. Sometimes stage versions of familiar books are more like radical reimaginings that anything that might be described as a faithful reproduction. And so it should be. One example is Laura Wade’s The Watsons at the Menier Chocolate Factory, which is so much more than just a standard Jane Austen adaptation, and also more than just a meta-theatrical satire. Another example is French playwright and poet Samuel Gallet’s recent play, Mephisto [A Rahpsody], which takes as its basis Klaus Mann’s 1936 novel, Mephisto. He was the son of novelist Thomas Mann, and once worked as drama critic in Berlin, but left Germany when the Nazis came to power; Mephisto was written in exile in Amsterdam.

Gallet’s Mephisto [A Rhapsody] has a similar starting point to that of Mann’s novel. The setting is the local theatre of the small provincial town of Balbek, and the story centres on Aymeric, a volatile actor who dreams of becoming a celebrity. While the artistic director of the company, Eva, wants to stage a revival of Chekhov’s Cherry Orchard, the younger actors, such as Luca, Nicole and the newly arrived Barbara, who is the daughter of the celebrated theatre-maker Anna, advocate a more political theatre: the extreme right is on the rise, and they want to combat it. However, Michael, another actor, is a young working-class man drawn towards the rightist party. Locally, Fabien is the new mayor, and of course he also is on the right. But, while political violence escalates, Aymeric decides to quit Balbek and try his luck in the big city.

Those familiar with Mann’s novel will know what happens next. And it doesn’t take a genius to work out that for the narcissistic Aymeric success is much more attractive than political engagement. Along the way, we watch as he seduces Barbara, then abandons her when he hits the big time, and how his obsession with starring in Hamlet chimes in with Fabien’s desire to provide culture to the masses. There’s a kind of ghastly inevitability about the story, and about the rise of the right in Europe. As a counterpoint to the groundswell of prejudice, the theatres in the play are little islands of sanctuary from the pervading madness. One character, Juliette Demba the black cabaret singer, symbolises a more tolerant society.

Gallet organises his drama in six sections, which each have evocative names (from the opening “A Long Way Away from the Big City” to the concluding “Elsinore”, in which Hamlet’s meditations on suicide and death are juxtaposed with the final minutes of Klaus Mann’s existence, as he ends his own life in 1949). The rapid escalation of events, punctuated by meta-theatrical moments which feature, for example, Marber the theatre critic, has a good forward movement and Gallet further punctuates the action by giving most of his characters a set-piece monologue. There are strong moments, as when Michael is confronted by Barbara for recording a piece of hate speech, which effectively escalate the action.

But as a piece of writing, Gallet’s play is not problem free. Unlike the original Mephisto, or indeed Eugene Ionesco’s Rhinoceros or Albert Camus’s The Plague, I think the piece lacks a powerful central metaphor: Aymeric’s embrace of Hamlet somehow doesn’t do it for me. Although the introduction of pigs’ heads has potential as metaphor, it is never really exploited. The final two scenes, which feature historical characters from German culture and Mann himself, feel redundant to me, and the use of the word “fascist” to describe the sickness overtaking Europe, instead of, say, far-right populism or authoritarianism, seems exaggerated and therefore too easy to ignore. The whole gesture is too obvious, too clichéd even.

That said, there is much to enjoy in Kirsty Housley’s often compelling production, which is distinguished by episodes of pleasurably wild abandon, despite the occasionally wobble when the stage picture looks awkward. Her designer Basia Binkowska creates a long narrow playing space, with shiny vulgar gold curtains and a long mirror that reflects the audience back on itself. The translation, by Chris Campbell (ex-Royal Court), is both colloquial and formal, as well as eminently playable, with Anna-Maria Nabirye, who plays Juliette Demba, given an extra speech which pertinently addresses racism in casting and forces us to question what we are watching.

Best of all is Leo Bill, who inhabits the character of Aymeric with an intense ferocity that is both thrilling and disturbing. In a bravura performance his character climbs his way to the top by any means necessary, and we are both fascinated and repelled. He is well supported by Elizabeth Chan and Subika Anwar-Khan as Luca and Nicole, Rebecca Humphries as Barbara, with Tamzin Griffin (Eva/Anna) and Sean Jackson (Fabien/Marber) playing two roles, while Rhys Rusbatch’s Michael and Nabirye’s Juliette are both excellent. In the end, I wish that the meta-theatrical side of the evening was less pronounced than the central story of celebrity versus commitment.