Diary of a Madman, Gate Theatre 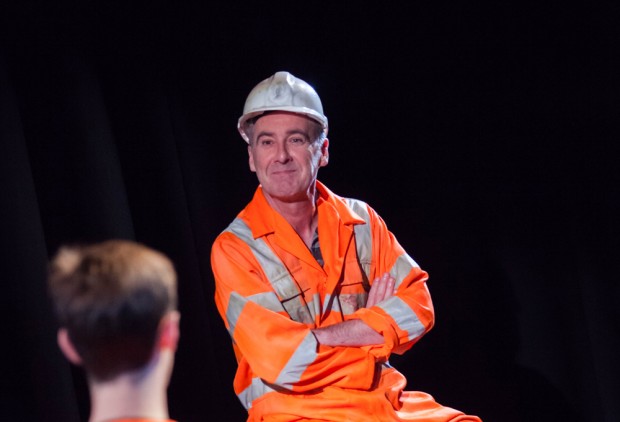 In popular culture, the image of painting the Forth Train Bridge, which is so big that the minute you finish you have to start again, is a powerful metaphor for futile activity. It’s a kind of modern version of the Sisyphus myth in which the king of Corinth is punished for his egoism by being forced to roll a huge boulder up a hill, and then watch it roll back down, repeating this action for eternity. In Al Smith’s new play, which is very loosely based on Nikolai Gogol’s 1835 short story of the same name, the original’s minor civil servant Poprishchin becomes Pop Sheeran, an “engineer” whose job involves painting and repainting the Forth Bridge.

Pop Sheeran is the latest in a long line of Forth Bridge painters, proud of his craft, of his family and of his country. When he hears, in one of the play’s strongest passages, that the bridge was designed by an Englishman and build with materials from all around the UK, he feels betrayed. In fact, his stable lifestyle is about to be rocked by the blast of change, a gale that is as as cold as any that the Firth of Forth can muster.

To begin with, a global corporation has bought the iconic bridge, and its engineers plan to use a new type of paint that is so efficient that it doesn’t have to be reapplied every year. So it looks as if Pop’s working life is under threat. Added to this, a young English Home Counties student, Matt, has been assigned to test out this new product, and Pop’s wife Mavra has invited him to stay in the family home in Queensferry, west of Edinburgh, while he works with her husband. The new lodger is a nice contrast to this Scottish family: Matt is a university-educated public-schoolboy whose father has been knighted for services to digital engineering. Will he be a docile pupil, or another form of English invader?

The Sheeran home also includes Sophie, the couple’s 17-year-old daughter, whose best friend Mel is a mouthy teenager — their banter opens the play and sets the initial tone of richly barbed humour. Although Sophie is attracted to Matt, the family situation is more explosive than he imagines. Not only are the Sheerans hereditary bridge painters, but they also have mental problems that are passed down the male line. Sophie’s brother Henry has had a psychotic episode, and is currently in hospital. Pop is on medication, which makes him impotent, so the arrival of the attractive young Matt precipitates a crisis in his masculinity.

The strength of Smith’s adaptation is that completely reimagines Gogol’s original in a contemporary Scottish context. This enables him to mix modern concerns about mental health with equally current ideas about national identity in a text that is full of good ideas and good jokes. Smith is particularly good at showing the strains on Pop’s psyche, from the dizzying fumes that he inhales at work to his feeling of being a “nobody”. His sense of the family having bad blood combines with his anxieties about his daughter and his memories of being beaten by his father to form a toxic brew. So when he stops taking his pills, things spiral out of control.

Diary of a Madman ditches a lot of the original story, although it does preserve its canine element — in the form of a glorious delusion about messages spoken by a Greyfriars Bobby stuffed toy. Smith’s drama moves seamlessly through a series of wonderfully bizarre conversations, which are at first funny and then sinister, before it arrives at the dangerous fury of its climax. There’s a perfect balance here between gobby hilarity and highly original images of social and economic change. I don’t think I can forget the Greyfriars Bobby arse-scratching scene, nor the vision of a teen dressed as First Minister Nicola Sturgeon wielding a broadsword. There’s also a neat theme about the dreg songs of the Forth, folk songs sung by oyster fishermen as long ago as the 18th century.

In Christopher Haydon’s superb production, first seen in Edinburgh last month, Liam Brennan plays Pop Sheeran with a deeply sympathetic mixture of dry wit and savage desperation that can be deeply disturbing. Guy Clark, making his professional debut as Matt, is a great contrast, his character’s callow sense of privilege peeking out from his youthful friendliness. The women are similarly excellent: Deborah Arnott’s worried but generous Mavra, Louise McMenemy’s shy but forceful Sophie and Lois Chimimba’s delightfully humorous and feisty Mel. On Rosanna Vize’s evocative set, with its spillages of red paint and iron girders, this is a strongly felt, thrillingly intelligent and rewardingly dense piece of new writing.