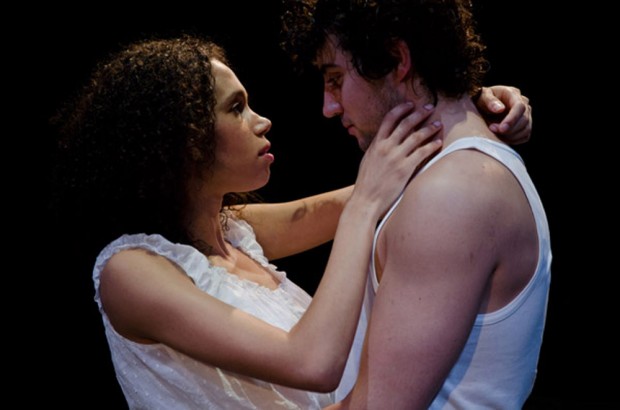 Playwright, film-maker and polymath Philip Ridley has had a great couple of years. All over the place, there have been powerful and revealing revivals of his 1990s classics, such as The Fastest Clock in the Universe. His 2000 play, Vincent River, enjoyed an outing in the West End and his 2005 shocker, Mercury Fur, got a new and exciting site-specific production. Now, his first new play in three years, which opened tonight, breaks fresh ground and represents an imaginative leap of the gleaming dark of his wild, wild imagination.

Like Vincent River, Tender Napalm — the oxymoron is typical of Ridley’s sensibility — is a two-hander; unlike his previous work, the writing is more abstract, more tantalising, more sexual. The story is the oldest one of all. Two teenagers meet at a party. They are drawn to each other; they exchange a few words. They have sex; they fall in love. They compete with each other; they fantasise freely. They tell each other stories about themselves. They fear death and disaster. In this one meeting, you can glimpse their whole relationship. All quite normal. Except that Ridley presents all this in a fractured, allusive, mysterious way.

On a bare set, with one chair on either side of a very wide traverse staging, Man and Woman begin the dance of love. As the pounding music sets the scene, and both actors start to flex their muscles, you immediately feel the beads of sweat gathering on your brow. A quiet voice deep inside tells you that this is going to be a good one. And it is! From the opening lines — “Your mouth”; “I could squeeze a bullet between those lips” — this is a piece that explores the language of love, mixing desire with fantasy, and blending contemporary fears with deep human needs. Soon both actors are hitting the floor and criss-crossing the space, electric with mutual attraction, skirmishing with words.

What Ridley understands perfectly is that sexual relations between two people open up their psyches, like a tin-opener prizing apart a closed tin, allowing a flood of our deepest fears and most intimate longings. The rush of being in love involves both a desire to be part of the other, and a need to prove a point. Between this Man and Woman there’s a struggle, a grapple, a competition. Sexual love is poetic, yes, but there’s also aggression and power play. And Woman gives as good as she gets.

With love, as Sigmund Freud taught us, comes death. Here, both Man and Woman imagine each other’s death, or disfigurement. There’s an eye-wateringly excruciating castration scene. There is some disturbing weird stuff that links genitals and explosives. Then there are the little deaths that follow sex, and the small demise of parting. Out of these erotic clashes between nurture and destruction rolls a Pandora’s box of images and symbols: a dolphin, a snake, a horse and unicorn, monkeys, a grotto, kings, queens and blood. References abound to superheroes, sci-fi situations, ancient legends and fairytales. Yes, Ridley is a master storyteller.

As one narrative melds into another, positive feelings tangle with negative images: a paradise beach becomes a tsunami-struck shore. Everyday events (like Man coming home pissed after a night in the pub) jostle with different versions of the same past event — memory becomes a battleground. Both characters like to be boss; both worry about infidelity. Fathers are dying, or absent. A child is mentioned; both youngsters fear that it might come to harm. There is a strong sense of loss. A song is sung, maybe a symbolic mutual stroking of each other’s subconscious.

Excellently directed by David Mercatali, whose production last year of Ridley’s Moonfleece was a joy, the acting is engrossing, exciting. Jack Gordon’s Man contrasts beautifully with Vinette Robinson’s Woman. He is muscular, dynamic; he punches the air and sweats. She is cooler, and not averse to the occasional knowing look. Between the two, there’s a real emotional tension, and sparks fly. Great stuff. With its swift-footed physicality, its wonderful verbal flights — capable of provoking spontaneous applause — and its intuitive sympathy for the world of the teen, this is a fabulous piece of imaginative writing. Long live Ridley!