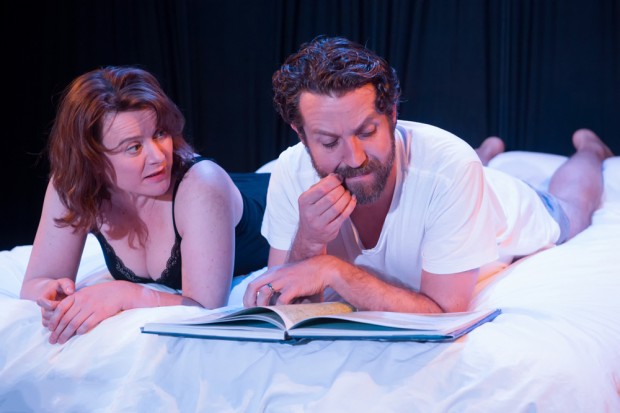 Once upon a time, quite recently, you couldn’t move for plays about youth. Now, there’s been an avalanche of dramas about ageing, usually in the context of dementia and family life. Maybe all of our main playwrights have suddenly grown up, or maybe the endless quest for novelty has deposited us on the shores of the current trend-setting idea. Nicola Wilson’s Royal Court debut is yet another play about Alzheimer’s, ageing and memory, but is it any different from Florian Zeller’s The Father, April de Angelis’s After Electra or Emma Adams’s Animals?

The answer is yes. And then some. To start with, the situation is both simple and complex: Megan is a successful middle-class professional, who works as a lexicographer and is married to Jez. They have two teenage children, Ned and Lila. In the past, just before she met Jez, Megan discovered that she has an equal chance of developing early-onset Alzheimer’s due to a gene, and her mother Eva ends up suffering from the condition in her forties. As Megan heads towards the same age, she is offered a genetic test which will tell her if she will develop the condition.

Should Megan take the test, and what are the implications of knowing your future condition? Will knowing one way or the other make life easier to endure, or harder? And, with this genetic condition, what are the implications for the couple’s children? And their children’s children? Put like this, the play sounds dry. It isn’t. Wilson has written a work of quietly devastating power, in which feelings of distress, disturbance and danger gradually accumulate in a story whose fragmentary structure — in the playtext there are 35 scenes for a 100-minute play — make this a fascinating evening.

Spanning about a quarter of a century, the story jumps between different time periods and involves a variety of characters. This works because Megan’s slowly decaying memory blurs the difference between true recall and delusion. In one scene, the whiff of Néscafé brings back childhood memories of beetles in a garden, in another the science of Alzheimer’s is explained, and — as the feminist Megan points out — the forgotten name of Auguste Deter, who was the first patient to be diagnosed by Aloysius Alzheimer, is restored to the public. Typically, the male doctor is remembered; his female patient is not. In another scene, the way that memories can be changed to justify bad behaviour is also tantalisingly mentioned.

A sense of genuine emotional need is a rare quality in a play, but it is present here in abundance. The family tangle, and the stress of looking after a comparatively young parent who is suffering dementia, is beautifully imagined, and it is at once individual and universal. Megan is portrayed without sentimentality or restraint. And the feelings of her family, while less present, are nevertheless shown with great economy and precision. The occasionally tricksy structure of the piece — one scene is played in reverse, and there are many repeats of telling lines — strongly suggests the experience of living in the present. And the situation of a lexicographer losing her way with words is both ironic and desperately sad.

Above all, the image of an intelligent and articulate woman slowly discovering gaps in her memory and fumbling over words, mashing them up, while her husband, son and daughter try their best to help her is heart wrenching. It really is. Wilson mixes raw feeling with intellectual stimulation, saying that “information is ammunition” before explaining how the tangles and plaques of the play’s title affect the structure of the brain. But this is not just lay science: behind it lies a commendably humane desire to see the person first, the disease second, not the other way around. And as the details of the family tragedy mount up, the only relief to the dry-mouth feel of bleakness is your appreciation of the shape and style of the playwriting, and also of the performances.

Lucy Morrison’s superb production successfully conveys the story’s ideas and emotions, and Monica Dolan’s Megan is personable, impassioned and mesmerising. At one point, when she says “I’m happy”, her eyes fill with tears and her voice trembles. It’s easy to empathise with a performance of this calibre. As her younger self, Rosalind Eleazar makes her professional debut: she’s a mixed-race actress but this is much more than colour-blind casting — in memory this version of the younger Megan is exactly what the older Megan might imagine. Likewise, Ferdy Roberts and Robert Lonsdale are excellent as the older and younger Jez, while Brid Brennan is a wonderfully humorous Eva. On Andrew D Edwards’s set, which is overlooked by a fizzing electrical light-tangle, reminiscent of both Nick Payne’s Constellations and Tom Stoppard’s The Hard Problem, the world of the play gradually sucks you in. Yes, this is one of the most engaging dramas about Alzheimer’s, memory and ageing that I have ever seen. And it will have a lasting effect: the next time I forget a word I’m sure that a chill will run down my spine…