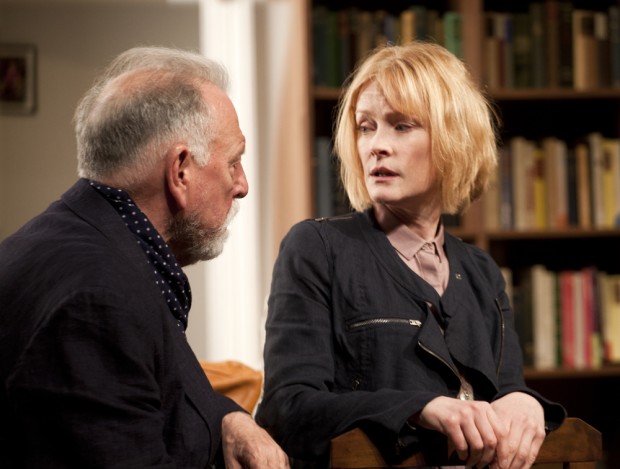 Dementia is an increasingly common theme in theatre, television and film. But although there are plenty of stories about old people suffering from Alzheimer’s, what does it actually feel like to experience this condition? French playwright and novelist Florian Zeller’s Molière Award-winning play — transferring to the West End after highly praised runs at the Tricycle Theatre in north London and Bath Theatre Royal — attempts an answer by using a sophisticated structure and a deliberately ambiguous method of storytelling.

So what’s the plot? Well it’s simple. Eighty-year-old André lives in a posh flat in Paris. He is suffering from loss of memory; he finds it difficult to recognise people he knows. His grown-up daughter Anne is worried, can’t cope and decides that he should move in with her and her partner Pierre. When his condition worsens, the couple discuss sending him to a nursing home. This is what happens. Simple. Or is it? Maybe. Or maybe not. Maybe André’s condition is so bad that Anne decides to leave him in care while she goes away to London to live with Pierre, the new man in her life.

Not only is the storyline uncertain, but, within minutes, André’s extreme disorientation, his feeling that his memories and his sense of time are fugitive, is established. Is that strange woman in the flat a care-worker, or is she his other daughter, Elise, who is absent from his usual daily life? What does his daughter Anne look like: blond or brunette? Who is that man? Is it Pierre, and is he friend, or foe? And that visitor, is she a nurse or a cunning thief? Who is speaking and what do they want?

Likewise, is André a charming bluff fellow, who likes to flirt with an attractive young female carer, or is he an extremely difficult patient whose obsessions drive him to violent acts? Part of the force of Zeller’s play is that questions such as these are beautifully dramatised. It tells its handful of incidents — a visit, a meal, an awakening — from the subjective point of view of André so the whole point is that he cannot be sure of what is happening to him. He feels raw emotions; his nerves are frayed; he longs to be mothered by his daughter; he lapses into a second childhood. At the same time, there is a literary edge to this nightmare: André is like Kafka’s K — a victim of unjust events beyond his control. At times, the violence of the language is reminiscent of Pinter: “How much longer,” asks Pierre viciously, “do you intend to hang around, getting on everyone’s tits?” It’s a clear echo of the interrogation scene in The Birthday Party.

By the end of the play, or perhaps from its very beginning, André is bedbound in a Beckettian stasis. His universe has shrunk to his sheets and his pillows and his nurse and his pills. He is free to fantasise. He once worked as a tap dancer; he used to be in a circus. Well, it’s more interesting than being an engineer. He is Lear, “a very foolish fond old man”. But, at the same time, he is full of fear; needy; desperately afraid. He is living an utter nightmare. It’s worse than folly; it’s sheer horror. And the play quietly suggests that this might be a state that is waiting for all of us. By the end of the 90-minute show, I felt drained and a bit depressed.

Christopher Hampton’s clean translation lends André a couple of verbal ticks, but most of the text is both precise and slightly impersonal. It’s efficient without being intrusive. As the furniture disappears from this old man’s world, providing a strong visual metaphor of his memory loss and confusion, James Macdonald’s production fizzes and jumps during the baroque music of the scene changes as if André’s mind was a record being dissolved in acid. Or a set of repeats. A stuck needle. All helped by a strong design by Miriam Buether. But the most impressive part of this evening is the acting.

Kenneth Cranham’s André is a strong, bear-like figure whose authority is visibly leaching away. He can, perhaps in his own mind, be charming to young women; he can be rational. But he can also be violent. Paranoid. Crazy. And he can imagine suffering violence. It’s an uncomfortable performance, brilliant in its understanding and its detail. Similarly, Claire Skinner as Anne is a woman holding it together, but only just; any worsening of her father’s condition could simply blow her away. She is everywoman worried about her father. Both are well supported by Nicholas Gleaves as Pierre, Kirsty Oswald as a care-worker, plus Jim Sturgeon and Rebecca Charles in the other fragmentary roles. Despite its moments of unexpected humour, this is a sobering evening of cold comfort to anyone who is afraid of growing old.