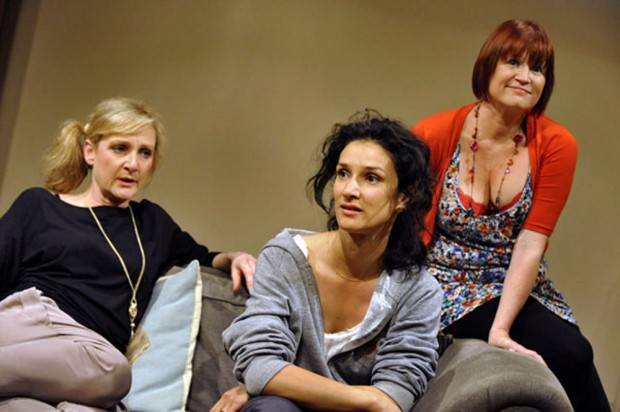 Nick Grosso is a good example of the “now you see him, now you don’t” playwright. In the mid-1990s, he was feted as a lads’ writer for his funny plays about masculinity, such as Peaches, Sweetheart and Real Classy Affair. Then he dropped out of view. He resurfaced briefly in 2002 with the deliciously surrealistic Kosher Harry. Then nothing. Until now. As his new comedy, which opened tonight in a production which stars Lesley Sharp, takes to the Royal Court studio stage, we have a chance to enjoy again Grosso’s knack for words.

The first surprise is that this is a girls’ play. Just as the set features a sofa plonked square in the middle of its very classy set, and right in front of a plasma screen, so the plot kicks off with a girls’ night in, a drunken evening to be spent watching The X Factor. Rosanna, Deanne and Katie are best mates. But although the first two have already downed a number of drinks, Katie doesn’t want to join them — she’s breastfeeding her new sprog. And her hubbie Frank won’t be necking any shorts either. He’s a recovering addict, and he’s given up for ever. Or has he?

While Katie trusts him, her mates — cynical, mouthy Rosanna and the slightly dim Deanne — are not so sure. Isn’t it true that once an addict always an addict? Besides, when the ladies send him out to get some cola and ice, why is he taking so long? Is he busy scoring? In a tremendously high-octane start, Rosanna and Deanne are straight off the blocks, roaring motormouths who question every aspect of Katie’s life. And although she gives as good as she gets, it’s the drink in the veins of her mates that is making all the running.

Grosso’s text burns and buzzes like the white rum that Frank fishes out of the back of a cupboard. It’s just girl talk, but on a runaway skateboard — a proper jaw-jaw festival. With barely a change of gear, Grosso then takes a medical textbook about addiction, rips out the pages, tears them up and throws them into the blender. Psycho-babble mixes with everyday wisdom. And just when you think it can’t get any more exciting, it suddenly does: the result is a multicoloured cocktail of sharp dialogue and fast repartee.

After a while, the pace slackens and you feel a sense of relief. Gradually, you get a better idea of the characters of the three women: Rosanna, played by the terrifically high-powered Lesley Sharp, is the acid-tongued bitch, Deanne is the comic Welshwoman while Katie is more laid back, a relaxed worrier. Unnervingly, Frank is a bit absent, even when he’s on stage — he seems suspiciously nice, offhand even. Although all of these people chat incessantly about offstage characters we know little about, and care about even less, the thematic texture of the play takes a little while to become clear.

Ingredient X starts off as an account of drug addiction, then broadens out into a much wider study of obsessive behaviour of all kinds: checking up on your loved ones, watching over your kids, fretting about this and that. Addiction to television is one theme; repetitive activity another. Kids are condemned for being tied to video games; some adults are obsessed with their exes; others are addicted to addicts. Like a yawning abyss, this maw of compulsion begins to swallow up all of the characters.

Set in a trendy loft designed by Ben Stones which sports a flashy kitchen and some very stylish furnishing, Deborah Bruce’s bright and likeable production has some engaging ensemble acting, with Sharp as a pinch-faced, talon-bearing wild woman and Lisa Palfrey as the wry and slightly dense Deanne. By contrast, Indira Varma’s Katie is quiet, open, reasonable — and on a short fuse. If Rosanna is too hard, Katie is too soft. James Lance’s sincere Frank seems almost superfluous.

But even this fine display of acting can’t disguise the painful indecisiveness of the final 10 minutes, and the play, after roaring through the evening on a great draught of drink, settles into something of a come-down. I should not have been surprised. When I interviewed Grosso more than 10 years ago for my book, In-Yer-Face Theatre, it was clear that he was a master of the subtext. It was equally clear that he refused to end his plays decisively. Deliberately. On purpose. Both his writing skills and, to my mind, his inconclusiveness are clearly on display here. Welcome back Nick.