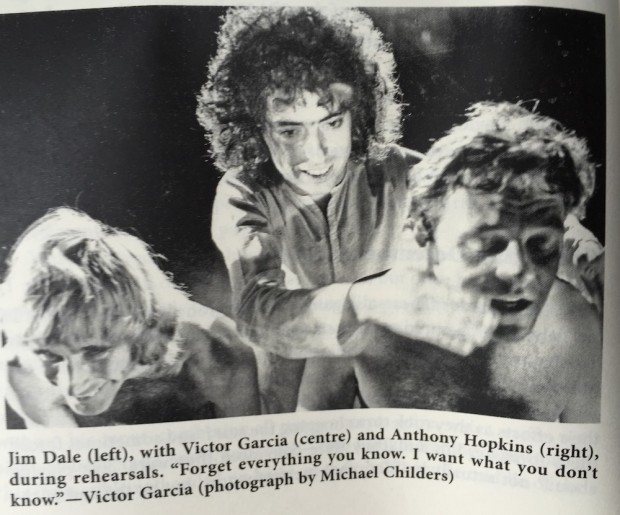 I’ve always loved the idea of chaos: it’s a word that seems to perfectly sum up the thrill and the uncertainty of the whole theatrical enterprise. So it was with enormous pleasure that yesterday I, along with Howard Loxton and my fellow judges actress and director Nichola McAuliffe and Cathy Haill of the Victoria & Albert Museum Theatre and Performance Collections, awarded the Theatre Book Prize for books published in 2016 to Stage Managing Chaos, by Jackie Harvey and Tim Kelleher, published by McFarland. This is a really exciting book, which tells for the first time the almost unbelievable story of the National Theatre’s production of Fernando Arrabal’s The Architect and the Emperor of Assyria, which was staged at the Old Vic in 1971. The show starred Anthony Hopkins and Jim Dale and was directed by Victor Garcia, an Argentinian director who had been lauded as an enfant terrible, and who was much admired by Ken Tynan, the theatre’s literary manager. The National’s supremo at the time, Sir Lawrence Olivier, had a bad feeling about the production from the start and asked its stage manager, Jackie Harvey, to keep a diary of the rehearsal process. This document makes up the core of the book, which tells the story suggested by its title: chaos. It is a tale of freezing rehearsal rooms, missed deadlines, unauthorized absences, technical hitches, impractical designs, desperately sobbing actors, controversial nudity and backstage backstabbing. To my mind, an irresistible concoction! The amazing thing is that Garcia not only gave gnomic directions, but was also completely absent for much of the rehearsal time. Yet the paradox is that out of this disastrous process, when the production team mounted the show despite an absentee director, came a production that many critics thought was amazing.