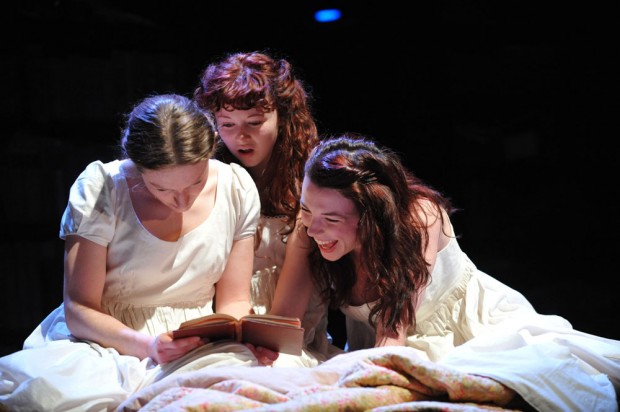 Mary Shelley and all her works have dogged the footsteps of contemporary theatre — in a way that’s a bit reminiscent of her most famous creation. Last year, there was Frankenstein at the National Theatre and this year a revival of Howard Brenton’s Bloody Poetry (about the Shelley/Byron ménage) on the fringe. Now, following the success of their Brontë, Shared Experience theatre company are back in London with a new Mrs Shelley docudrama.

The good news is that Mary’s story is a perpetually interesting one. Born in 1797, she was the daughter of the radical philosopher William Godwin and Mary Wollstonecraft, the feminist. After her mother died when Mary was 11 days old, her father brought her and her half-sister Fanny up by himself. When she was four, Godwin married Mary Jane Clairmont, a neighbour. When she was 16, she eloped with the poet Percy Bysshe Shelley along with Clairmont’s daughter, Jane. Aged 19, she wrote Frankenstein. In that year, 1816, Mary spent a summer in Geneva with Shelley, Lord Byron and her step-sister Jane (aka Claire). It was an attempt to live differently, outside of social and sexual conventions, but this experiment in radical ways of relating to one other had enormous psychological costs. Shelley’s first wife Harriet committed suicide, and so did Fanny. Most of the children the women bore didn’t survive.

This version, written by Helen Edmundson and directed by Polly Teale, looks closely at Mary’s early years. The play begins with the domestic life of the Godwins. As William Godwin struggles to make a living through writing, his wife holds things together, with sporadic help from their teenage daughters, Mary, Jane and Fanny. When the 21-year-old romantic poet Shelley calls on his hero Godwin — who has penned books on radical politics — the young girls all fall in love with him. In this hormonal hothouse, it is Mary who is chosen and, against the wishes of her father, the couple elope, taking Jane with them. In the second half, we gallop around Europe with the three youngsters, watch the women as they get pregnant and struggle to survive on little money, and see how Godwin’s family is almost suffocated by debt. Slowly, the fraught conflicts between the family and the runaways are reconciled, although not before things get very messy. This is partly because Edmundson’s text is awkward, plodding and long-winded, and partly because the play attempts to cover too much ground.

Still, the characterisation is sound: the strong-minded but impractical Godwin, his talkative and spiky wife, and the contrasting daughters — truth-telling, passionate Mary; anxious, timid Fanny and the highly strung, histrionic Jane. In the best scenes, the passions flow, hearts beat faster, and voices are raised in anger, or anguish. On Naomi Dawson’s literary set, a claustrophobic room with a long table and bookshelves, you’d expect the play to make connections between Mary’s life and her masterpiece, Frankenstein. But, oddly enough for a company that specialises in showing the workings of the inner mind, there is very little of that. Although the play opens with a vivid image of Mary’s mother drowning, and there are glimpses of Mary breathing life into a dead baby, that’s about all there is. Is Doctor Frankenstein a cipher for Godwin, or is Dad a monster? Is Shelley a father figure? Who knows? Worse, by the end of this long evening, I no longer cared.

Still, the cast is good. Kristin Atherton is a vivacious and glowing Mary, Flora Nicholson a prim Fanny and Shannon Tarbet a shrill Jane. William Chubb is steady as the high-minded Godwin and Sadie Shimmin is satisfyingly frantic as his wife; only Ben Lamb is disappointingly uncharismatic as Shelley. So despite the elemental atmosphere of the play, with its depiction of the forces of nature, and the inherent interest of the material, the connections between life and art are never convincing enough to repay our investment in the characters.