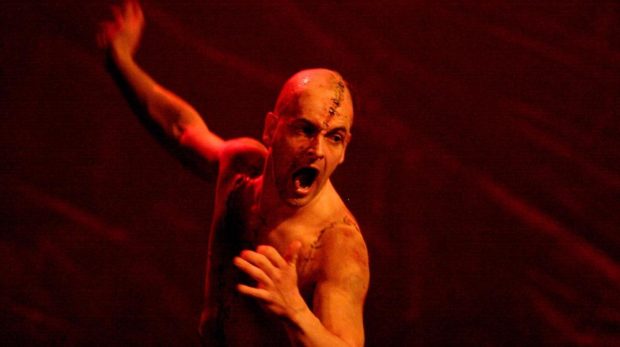 So far, it could be said that the National Theatre is having a good lockdown. Every week, this flagship streams one of its stock of NT Live films, which are always a welcome reminder of the range of its output over the past decade or so. This week it’s the turn of Danny Boyle’s much-praised 2011 production of Mary Shelley’s Frankenstein, adapted for the stage by Nick Dear, and starring Benedict Cumberbatch and Jonny Lee Miller, who alternate the roles of the scientist and the so-called monster on each successive evening, offering a masterclass in interpretative acting.

The familiar story is told with great rapidity: Victor Frankenstein, an ambitious scholar-scientist, creates a creature out of body parts and manages to reanimate it. Appalled by its monstrous appearance, he throws his creation out of the house. Alone in the world, the creature inspires horror in all who meet him, and only finds peace when he comes across a kind old blind man in a remote part of the country. Here he acquires an education, symbolically following Shelley’s original invocation of Milton’s Paradise Lost, and then conceives of a desire for a mate. He travels to Geneva to demand that Frankenstein build him a female, just as the scientist is about to marry his adopted sister Elizabeth. Events stumble towards a brutal conclusion.

Dear and Boyle’s version recounts events from the point of view of the nameless creature. It starts not with Frankenstein and his hunchback helper setting up in a laboratory, in the middle of a lightning-laced thunderstorm, but with the birth of the creature, in a kind of placenta-ripping sequence in which first his hand and then his finger pushes against a membrane, which splits, allowing him to emerge into the world naked, like Adam (although a blush-sparing loin cloth is used here). Following his elemental creation, he moves into society and we witness his rejection by prejudiced people, until he finally finds temporary solace with the blind man in his isolated hut. So when he meets Frankenstein again we see their relationship from the perspective of an outsider.

Our sympathy is with the creature, and the story emphasizes the destructive consequences of not knowing your name, of being solitary and of being unloved. The creature’s violence comes from his ill treatment. On Frankenstein’s side, the picture is mixed: clearly, he has acted irresponsibly in making a being who he doesn’t care for, and there is more than one exchange when Elizabeth points out that he shouldn’t play God, but rather take his family responsibility by becoming a father. Trouble is, he is obsessed with science and not much interested in love. He never even touches his fiancée. Like anyone who has made a truly tragic mistake, the story is also about his desperate efforts to put things right.

Dear has thankfully eliminated some of the original story’s complexity, and this version powerfully shows how both Frankenstein and his creation are two sides of the masculine self; one is rational and cerebral, the other sensuous and full of feeling. The antagonism between the two, which focuses on the creature’s intense desire for a wife, is the conflict between vaulting intellectual ambition and a more grounded bodily happiness. Nurture and nature struggle together. Care and control fight it out. In the end, it is no spoiler to note that both scientist and creature are locked together in an eternal embrace. Paradise has been well and truly lost.

Clearly, this is a myth about science and the reckless desire to push boundaries, so it is tinged with hubris and rapidly turns into a revenge tragedy. But it is also about the elemental longing of all of us for human connection. A high point is when Frankenstein and his creation discuss the meaning of love. It is likewise a tale of fathers and sons. Dear grounds the action in family, its absence and its obligations. The pervading feeling is that none of us choose to be born so the creation story here has enormous resonance. It also has feminist slant, with the character of Elizabeth almost a parody of pre-modern womanhood, under-educated and fixated on having children.

The production’s double casting allows us, especially in the close ups of Tim van Someren’s thrillingly filmed version, to savour two strong performances. Cumberbatch’s creature is a mesmerizing creation, at first uncomfortably jerky, then gradually being educated into humanity and finally astonishing us by his eloquent plea for love. His anger is scalding, and his energy is palpable, although some might accuse him of over-acting. As Frankenstein, by contrast, he is both icy and frantic. Miller’s interpretation is less detailed, but perfectly carries a brute panting force as the creature and a confident arrogance as Frankenstein. Both actors are at their best in their passionate advocacy of social transgression and intellectual creativity. But my preference is for Miller as the creature and Cumberbatch as Frankenstein.

By itself, double casting suggests the story’s doppelgänger theme in what is essentially a fairy tale for grown-ups. With its aerial shots, hazy passages and delight in splashes of light, shots of a myriad glowing bulbs and red-soaked then phosphorous-blinding moments, this filmed record is enjoyable and occasionally almost enchanting. For example, the creature’s early pleasure in childlike joy, amazed by the dawn, or a flight of birds, bathed by rain and thrilled by falling snow. But the film also cruelly exposes Dear’s writing, which is often banal and lacks both subtext and ideas. Infuriatingly, there’s not a trace of Shelley’s profundity, and the quotations from Milton only point up the thinness of the text, despite its numerous references to Adam and Eve.

Likewise, Boyle’s directing is by no means flawless. At its best, there’s sense of a ranging imagination, greatly aided by designer Mark Tidesley and especially Bruno Poet’s superb lighting. But too often the staging is static and so lacking in dynamism that you are forced to reassess the director’s awesome reputation. In many passages the show lacks visual stimulation, and Underworld’s electronic music rarely galvanizes the emotions. I could have done without the faux folk singing. It’s all a bit clumsy. Exceptional moments, like the birthing and the arrival of the metaphorical industrial age train, or the creature’s dream of a mate, are just that — exceptions. Apart from the dynamic duo, the rest of the cast, such as Naomie Harris’s Elizabeth, is under-used. Despite some flashes of resonance, as when Frankenstein claims he can cure any sickness, this show is not uniformly brilliant.