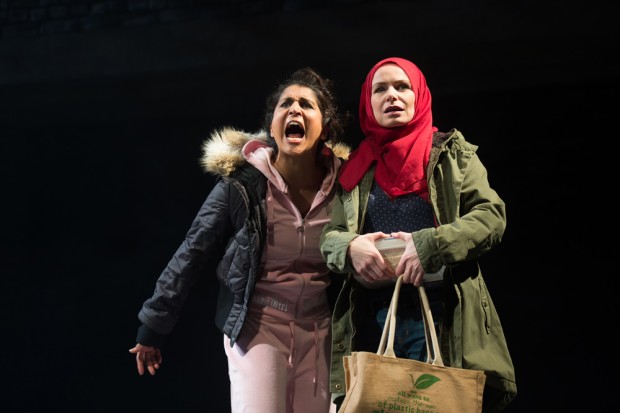 Plays about Muslims in British theatre tend to open a door on a segregated community, a place cut off from the mainstream. But stories that show cultural conflict — between whites, Asians, Muslims, Hindus, Poles and Sikhs within the mainstream — are much rarer. So it’s good that actor-turned-playwright John Hollingworth’s debut play, whose title alludes to Walt Whitman’s “I am large. I contain multitudes” from Song of Myself, dares to explore conflict between several social groups.

Dateline: Bradford. Some time in the nearish future. As Conservatives gather for their annual conference in this multicultural city, protestors against government intervention in Muslim countries build a peace camp. Against this volatile background, Kash — a fortysomething Pakistani-born British liberal Muslim (his character is typical of the play’s eye for complexity) — plans to make an official speech about the hard graft needed for toleration.

But this is not just a play about the political, it’s also personal. As Kash tires to hold the middle ground — telling white Britons that Asians are not a threat, and telling British Asians that there is a place for them in this country — his closest family members make life difficult. First there’s Natalie, his white middle-class lover. She has decided to convert to Islam, and wear the head scarf. Then there’s Lyn, who is Natalie’s white English mother, and who gives voice to racist views about immigration, and how things were better in the past — especially when she’s drunk. And she’s often drunk. Yes, she’s a symbol of traditional Englishness.

This family story, which gestures towards some of the complexities of life in contemporary Britain, is finished off by Qadira, Kash’s 18-year-old Muslim daughter. As a teenager, and effectively the step-daughter of Natalie, Qadira is idealistic but angry. Very angry. Her solution is direct action. And, when the peace camp comes under attack, she decides to carry out an audacious plan. As this plot develops, the drama’s big issues — identity and belonging, belief and tolerance — come at you with all the force of a megaphone, with important questions making the air feel loud.

Although it has to be said that Hollingworth’s exposition is not as clear as it could be, and the subplot involving two Tory spin-doctors coming up from London is not strictly necessary, his characters are written with a passionate energy. And with its reminder of a world split between American military interventionists and militant Islamists, and its highly topical references to young men and women being radicalised or going off to Syria, this really is a play for today. The fraught subject of the conversion of white women to Islam is treated with both humour and compassion.

Multitudes is certainly not perfect. Some of the dialogues are clumsy and some scenes have a messy quality, yet the occasionally raw and ragged quality of the writing works well with these characters, and a passionate, often deeply emotional, charge pulses through the story. Some moments are hot. Indhu Rubasingham’s scrupulous and fluid production has a good cast — Navin Chowdhry (Kash), Clare Calbraith (Natalie), Jacqueline King (Lyn) and Salma Hoque (Qadira), plus Asif Khan and Maya Sondhi who play a handful of minor roles — and several atmospheric scenes, in the mosque, at a vigil, in the peace camp, convey the richness of the material. Yes, with its political urgency and epic ambitions, this play is large.