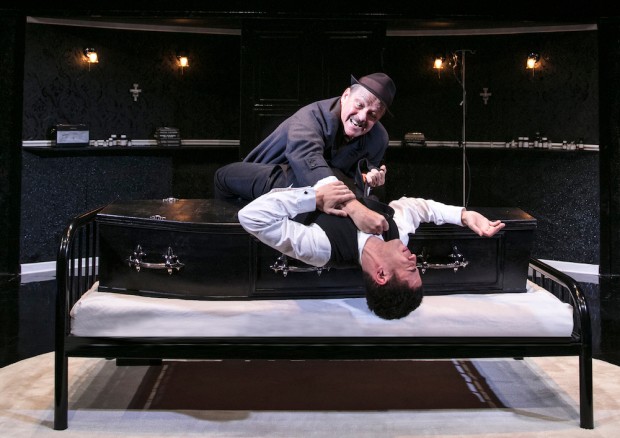 Fifty years ago this month, playwright Joe Orton was murdered by his lover Kenneth Halliwell. His debut play, Entertaining Mr Sloane, had both outraged and delighted West End audiences in 1964, and his follow-up a year later was Loot, which was a flop at first and then a hit when restaged in 1966. This is the show currently being revived at the Park Theatre in a production which restores some of the lines cut by the Lord Chamberlain, the censor, on its first outing. Only a handful of lines, mainly about a brothel and some casual blasphemy, are involved, but it’s nice to think that director Michael Fentiman discovered the original script in the archives of Leicester University, the city where Orton grew up.

The problem with Orton’s work in general, and Loot in particular, is that it is still burdened with its reputation as a scandalous and subversive piece of political farce. In fact, it is best to forget all about the hype and just enjoy it for the sharpness of its wit, and the perceptiveness of its plucky attitude to authority. Set in Mr McLeavy’s house, the black comedy takes place on the afternoon of the funeral of his late wife. The plot is about two personable young crims, McLeavy’s son Hal and his lover Dennis, who hide the proceeds of their latest bank robbery in a wardrobe. Dennis works in the funeral parlour taking care of Mrs McLeavy’s remains, so, when the police begin to suspect them, they put the money in the coffin and Mrs McLeavy’s body in the wardrobe. Then Truscott, a police inspector who — in a surreal touch — disguises himself as a water board official, arrives to investigate the robbery.

At the same time, the grieving widower McLeavy is being consoled by Fay, a nurse who has already murdered seven husbands and is responsible for Mrs McLeavy’s demise. As she attempts to seduce the serious-minded Catholic, the plot thickens. Initially, the chief joy of the play lies in the hands of two characters, the irrepressible Fay, played with a torrent of energy by Sinéad Matthews, and the mysterious Inspector Truscott, played with just the right amount of self-satisfied contempt by Christopher Fulford. Matthews has a rasping Irish accent which she uses to hilarious effect, while Fulford attacks the role as if he was berating a suspect — great stuff.

Fentiman’s production, created with the Watermill in Newbury (which it visits in October), has a deep black set by Gabriella Slade which features gold crucifixes and medical paraphernalia. The evening starts with the dulcet tones of Mrs Mary Whitehouse and other morality campaigners, a rather unnecessary reminder that this was once a shocking and to some a disgusting play, but soon the farce is ticking like clockwork as the one-liners ping around the room, and the jokey exchanges swell with dazzling, well-timed, humour. Today, the jokes about corrupt cops, venal priests and blundering officials all sound fresh and to the point. We laugh, or at least I did, at authority with an almost infantile pleasure.

Ian Redford is wonderfully befuddled, and totally convincing as the straight man McLeavy, the butt of the jokes of others, and his roars of despair at the end dwindle into plaintive assertions of his innocence. As the two crims, Calvin Demba and Sam Frenchum bring a touch of youthful confidence and even sweetness to the bisexual Dennis and the clean-cut Hal. But the surprise star of the evening is Anah Ruddin, who plays the corpse of Mrs McLeavy, which involves being heaved about in excruciatingly terrible situations, and even, at one point, stripped naked — the sole taboo-breaking moment of the play today. Quite rightly, she got an ovation at the end of the press night.

Anti-authoritarian, spiky and beautifully written, this is a hugely enjoyable black comedy that joyfully throws out its paradoxes, epigrams and slapstick, all Wildean, all sharply delivered here. The well-drilled cast make lines like “Had euthanasia not been against my religion I would have practised it — instead I decided to murder her” or “Most people would at least flinch upon seeing their mother’s eyes and teeth handed around like nuts at Christmas” seem fresh. And the comic timing is great. Even the groanworthy puns feel funny. As you’d expect, the laughs about a Pakistani brothel and dishonest cops have a renewed relevance, while laughing in the face of death and about ill-gotten money is a hardy perennial, so this modern classic is a thoroughly fun evening.