Home » Blog » About The Biting Point

About The Biting Point 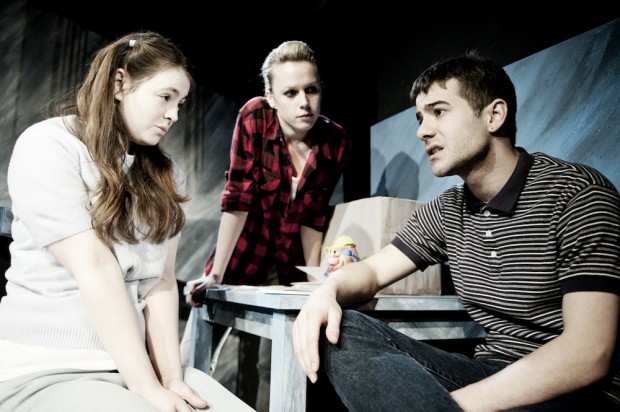 Sometimes, the London fringe delivers. Theatre 503’s successful new season continues with Sharon Clark’s 75-minute London debut, The Biting Point, which explores political extremism with a play set in the early years of Thatcher’s Britain. The story shows the private preparations of several individuals for a public confrontation, a demonstration in which the Anti-Nazi League are expected to clash with the British National Party. Three couples are involved: Malcolm is a young man who looks after his sister Wendy (who has learning difficulties) and hopes to get closer to Linda, a fellow activist. Dennis is a teacher who is having an affair with Anna, a very young woman. Meanwhile, Ruth is a lonely soul whose life is a source of bitterness. The trick of the play is that, until the final minutes of the performance, you can’t tell who is the fascist, the anti-racist or the police officer. But what you can appreciate is the way that Clark explores, with a gift for muscular dialogue and strong sense of claustrophobia, the anguished personal psychology behind political violence. Dan Coleman’s powerful production boasts an expressionistic stage design by Mark Friend, a great 1980s soundtrack by Tom Hackley, and well-shaped performances from Gyuri Sarossy (Dennis), Charlie Hollway (Malcolm), Sarah Hoare (Wendy) and Lizzie Roper (Ruth). Jessica Barker-Wren makes her stage debut as Anna. If a couple of Clark’s lines of dialogue are a bit unconvincing, the overall gesture of her vision of the moral chaos of England pulses with vivid life, and with relevance.