Home » Blog » About Noises Off 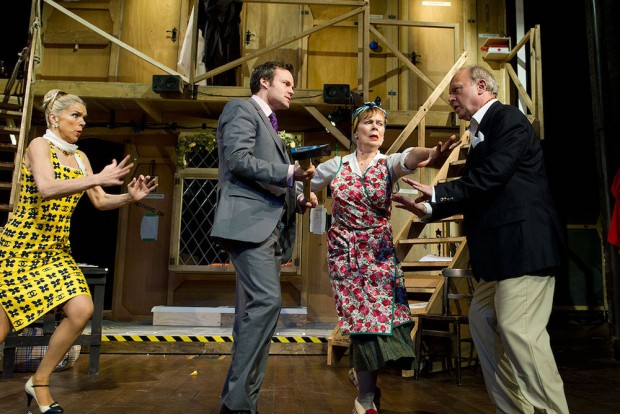 Yesterday, in a spirit of seasonal pleasure hunting, I saw Michael Frayn’s Noises Off at the Old Vic. This is one of the few plays that is genuinely hilarious each time you see it, perhaps because it reminds you just how dangerous performing can be (the way things go wrong is appalling, and appallingly funny) and it’s also sheer fun. Dramatic reversals of fortune, on stage and off, lots of slapstick and some brilliant lines all combine to make this one of British drama’s most sublime comedies. But as well as being pure joy, the play also explores the realities of theatre. The characters include the grumpy director, who is having affairs with his stage manager and young actress, the gossipy star, the veteran actor who asks awkward questions about the playtext, and the old drunk who has to be kept away from drink at all costs. All the boredom, panic, exhilaration and depression of performing in public is beautifully caricatured. The exaggeration also works as a perfect vehicle for showing how love runs riot among a small company of people, and reminds us that every age — even the liberated present — has social rules and conventions whose ludicrous disruption is the stuff of comedy. As the actors run amock on the stage, each pursuing their own goals, the threat of chaos and the joys of anarchy jump across the footlights. Lindsay Posner’s excellent cast — led by Robert Glenister, Celia Imrie, Janie Dee and Karl Johnson — perform with precision and expert timing. I also liked Jonathan Coy, whose performance lends his actor character a nicely bewildered expression. This is a classy version of classic play.