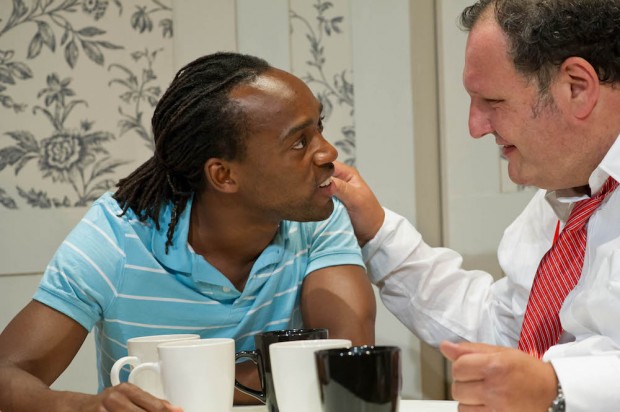 Yesterday I was at the Finborough Theatre to see Nick Gill’s deliciously extravagant Mirror Teeth. This is a vivid and wild satire, which is set in Our Country, and rips the veil of politeness from the everyday conversations of the Jones family, proving once again that comedy has a licence to offend. Drawing on an absurdist tradition, the play’s radical politics emanate from the fact that the family — parents James and Jane, and children John and Jenny — gets its money from arms dealing, but its comic bite is a bit closer to the bone. At first, when 18-year-old Jenny brings home Kwesi, her black boyfriend, the play seems like a straight satire on racism of the 1950s variety, but soon it deepens into a humorous account of contemporary sexual, spiritual and moral beliefs. Jenny is constantly referred to as an “18-year-old sexually active schoolgirl”, and Kwesi is so religious that he won’t have sex with her. Even more taboo-tickling is the sexual banter between Jenny and her brother John, and between Jane and Kwesi. Suggestions of incest, explicit sexual scenes and a plot that takes the family to the Middle East to sell arms to insurgents all make for genuinely provocative viewing. Although this initially hilarious piece of new writing does falter a bit half way through its 90 minutes, its atmosphere of spirited absurdity feels fresh and occasionally even a bit dangerous. Well directed by Kate Wasserberg, this is a fringe farce that shows that, while money never sleeps, morality does tend to doze off.