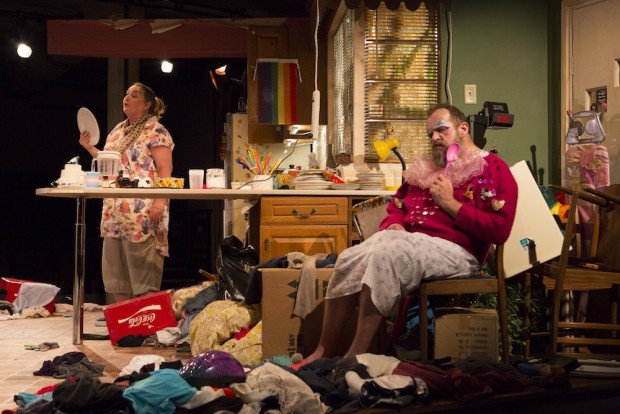 Donald Trump’s electoral success was, we have been told, fuelled by the anger of the American working class. But how do you show that kind of anger on stage, and how do you criticise its basis in traditional masculinity? One way, and this is the path chosen by playwright and performer Taylor Mac in Hir, a satirical comedy which was first staged in New York in 2015 and now gets its European premiere at the Bush Theatre, is to view the family from a transgender perspective. And, at first, this strategy looks very promising.

Hir is set in a settlement somewhere in California’s Central Valley, where plywood houses have been built on landfill sites, and dozens lie empty, abandoned during an economic downturn. All is not well in the Connors’ cheap abode: fiftysomething Arnold is a plumber who lost his job to an Chinese-American because he couldn’t control his anger, and has since suffered a stroke. Once the traditional head of the family, ruling over his dependents with violence, he is now incapacitated, full of pills, and has to be looked after by his wife Paige. But after years of feeling downtrodden, she has decided to refuse the role of carer and to set out on a personal re-education programme aimed at expanding her mental horizons.

The character of Paige is one of the main delights of this play. She is one of those stage monsters who fascinates as well as repels: newly self-educated, she holds forth about a huge range of theories, not only about gender equality, but also about evolution. Her pet idea is that we are all basically fishes, and all out of Africa. Her new job as a community coordinator has given her the confidnece to proclaim her vision of making the whole world a “safe space”. In her inspired battiness, she strides around, enjoying the shock waves that talking about the clitoris to her children provokes, and revelling in her newfound power.

Helping Paige in her quest for self-fulfillment is her youngest offspring, 17-year-old Max, who was once Maxine but is now transitioning. So when the family’s oldest son, Isaac, returns from a three-year stint in the US marines, he finds his father wearing a dress, his sister growing a beard and his mother lecturing him on the new gender realities. “Max is no longer a she or a he,” she explains. “You must use the pronoun hir (pronounced here), HIR, in place of the pronouns her or him.” And that’s not all: Isaac’s new family is intent not only on radicalising gender, but also on questioning property rights, and traditional masculinity. And nearly everything else. At its best, the play buzzes with ideas: at its worst, it feels like a long academic conference on gender identities.

Isaac is appalled. The poor but neat home that he had stored in his memory while working for the army’s mortuary department has disappeared: instead, the place looks like a squat, with unwashed clothes lying everywhere and domestic anarchy in place of familial cosiness. “We don’t do cupboards anymore — we don’t do order,” says Paige. Isaac is worried about his father, and disgusted with Paige and Max’s disrespectful treatment of him. Paige has made up dad’s face, put him in a clown’s costume and topped everything off with a fright wig. But can Isaac, who has problems of his own, restore normalcy to the home?

Although Mac writes mordantly in a satirical vein, with lots of ideas bouncing off the crumbling walls, especially in the first act, Hir really has not got much of a story, and while the conflicts introduced at the start of the piece intensify, they are never at all resolved. In Nadia Fall’s production, the evening is neither particularly funny nor emotionally engaging. She has not really found the right tone for a play that its author describes as absurd realism. On designer Ben Stones’s set, which looks suitably grotty, Fall’s cast do their best: Ashley McGuire’s larger-than-life Paige contrasts well with Arthur Darvill’s passionate Isaac, while Griffyn Gilligan’s vulnerable Max offsets Andy Williams’s disabled Arnold. At its most provocative, with uncomfortable references to disability, fire risks and body parts, the play works well as an edgy satire. But despite a lot of good moments — including the battle of the air con, the military bed-making sequence and the shadow puppet scene — the final result is less than the sum of its parts.