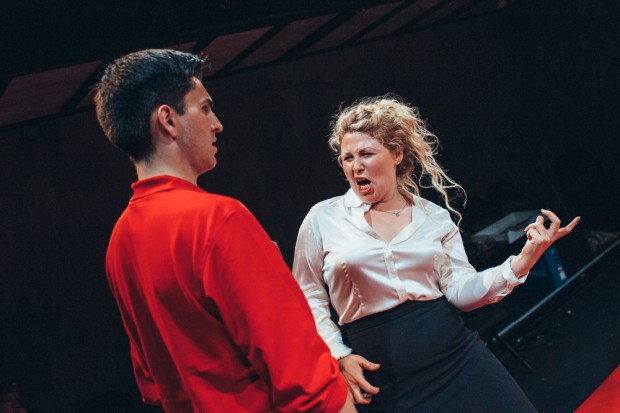 Supermarkets are the cathedrals of consumer society. In their aisles, we can seek out the spiritual communion we need; their announcements of offers are our sermons; and their shop assistants are our secular priests. As we pray for better bargains, and lower prices, we know that the true religion has its dark side, its costs, its human victims. These are the corner shops and the farmers, both of which lose out in the relentless march of the corporate supermarket. If this makes sense to you then you will find much to please you in Michael Ross’s new play, Happy To Help.

Tony is the UK managing director of the Frisca supermarket chain, an American multinational. On the suggestion of his boss, Huck Lansing, he goes undercover to work for a week as a shelf-stacker in a local branch, which is run by the super-efficient Vicky. Here he meets Josh, a teen with aspirations to be a rock musician, and Elliott, a gay guy who is attracted to Josh and who spends much of his time at work trying to organise a trade union (anathema to the brashly American Huck). Inevitably, Tony finds that the staff, which also includes supervisor Myra, is discontented and unhappy with their pay and conditions, while manager Vicky is dictatorial and sadistic.

The plot hinges on the fact that, in the first scene, we witness Tony — 15 years previously — making a deal with Ned Swithin, a farmer who has gone out of business and who blames Frisca supermarkets for his plight. It’s only a matter of time before this injustice is righted, although most of the play is a plotless yet bright satire about the consumer society. Although its criticisms are pretty predictable — “shopping is our religion” and, best of all, “supermarkets don’t kill small shops, people do” — Ross writes good dialogue and the exchanges between the characters have energy and flashes of humour, which make up for the rather underdeveloped characterisation.

Happy To Help has some enjoyable moments, with the cast performing adverts for the Frisca brand, and singing the company song, and the scene in which Vicky pummels Josh about his smirking attitude to the job says a lot about the relationships between managers and staff in this low-pay industry. But the material about Elliott’s push for unionisation and Josh’s anarchist ideals could have been elaborated a bit more, and I have a feeling that the facility of the writing obscures a deeper exploration of the piece’s themes.

Ross’s play was shortlisted for the Liverpool Hope Playwriting Prize, and was developed through the Park Theatre’s Script Accelerator programme. This production, which features designer Emma Tompkins’s red staff uniforms and company logos, is directed by Roxy Cook in what is a sometimes uncertain tone, although its cast generally give a bright and likeable account of the satire. Katherine Kotz injects Vicky a relentless sadistic energy that is enjoyable to watch, although Charles Armstrong doesn’t have much to do as the hapless Tony. Ben Mann’s Josh is suitably awkward, sarcastic and idealistic, while Jonny Weldon’s Elliott conveys the distress of a born loser. Rachel Marwood and David Bauckham make up the rest of the cast in an evening that is sharply written, occasionally funny, but lacking a bit in drama.