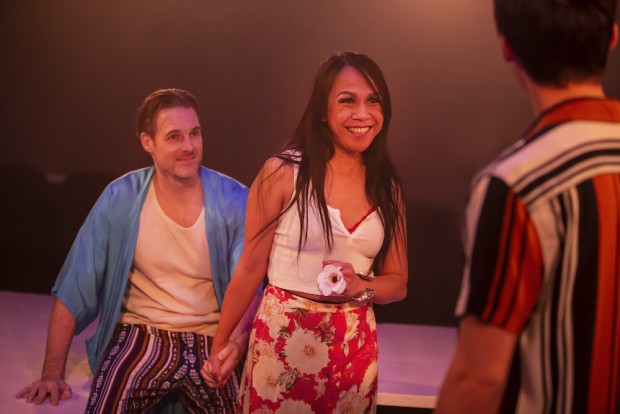 Gender fluidity should be fun — after all, it’s all about love. And love can take any shape it likes: straight love, marital love, gay love, trans love, paternal love, maternal love, family love, and, of course, sexual love. All of these make an appearance in Tom Wright’s My Dad’s Gap Year, a well-intentioned comedy about sex and sexuality which is apparently based on a true story — and it opens right at the start of LGBT History Month, a highly symbolic moment. But while the play successfully presents positive images of gender fluidity during Pride Month, neither its good intentions nor its symbolic aptness can necessarily make it a good drama. On the plus side, it does feature Michelle Collins, one-time EastEnder, and an excellent diverse cast.

Dave is a middle-aged, working-class unemployed Londoner who is separated from his wife, Cath (Collins), and has a bad drinking problem. Now living with his rather uptight 18-year-old gay son William, he decides that what the teenager needs is not a stint of work experience at the marketing company where Mum works, but an adventure on the other side of the world. So he decides to book a gap-year long vacation in Thailand, where William meets Matias, an 30-year-old mixed-race gay guy who is ready to show him a good time. Meanwhile, Dave — in full mid-life crisis mode — is attracted to Mae, a 30-year-old Thai trans female. But how long will Mae put up with Dave’s drinking, and what happens when Matias opens William’s eyes to the pleasures of booze, drugs and sex?

As the 90-minute piece drops its inhibitions with the speed of a holiday-maker getting naked, the relationship between young William and his father (bad) and his mother (good) for a while gets a blaze of sunlight from the appearance of the multilingual Spanish-Thai Matias, who is an architect, and the energetically optimistic Mae, who works in a local lady-boy bar. There’s a strong sense of widening horizons as both Dave and William glimpse, and enjoy, new possibilities, whether linguistic, culinary or, above all, emotional. But the fun of sex is gradually squeezed out by the weight of family fuck ups: William takes to the druggy lifestyle with the same commitment to self-destruction as his father Dave took to drink. Like father, like son.

And although there is plenty of material here about the post-nuclear family, certain traditional tropes also crop up: in one moment of classic role reversal, a sober William becomes the parent while drunken Dave acts like a  child. Like a recent episode of ITV’s Cold Feet, the attempts of father and son at bonding has mixed results. Back in the UK, Cath experiences life after marriage as an opportunity, with a real sense of liberation. In general, this account of a kind of Bangkok Babylon is at its best when it explores generational conflict, especially those moments when revelations about ill health give the drama a real tang of emotional truth, but unfortunately most of the rest is neither funny enough for a comedy nor sad enough for a tragedy.

Wright’s storytelling is quite predictable, and after he has brought his characters together there is nowhere much for them to go so the drama slackens. When it wants to be informative, the writing is awkward, and when it wants to be funny it is usually just vulgar and slight. Too often the text feels like a series of instructions about gender fluidity, with characters spending too much time telling us, rather than showing us, who they are and what they feel. Given Wright’s great experience in the field of playwriting, the writing is surprisingly poor. That said, the text does occasionally throw up a guffaw, and Mae gets one strong speech that tugs at the heartstrings, while Dave gets another — much longer — one that really doesn’t.

Rikki Beadle-Blair’s lively production makes the most of designer Sarah Beaton’s rather neutral platform space, and the whole cast offers well-focused performances. Adam Lannon gives the unpleasant Dave a suitably degenerate desperation, which contrasts well with Michelle Collins’s more centred determination. As the younger generation, Alex Britt (William) and Max Percy (Matias) have an appealing rapport, and relate well to each other on stage. Sparks fly! Similarly, Victoria Gigante’s attractive Mae radiates a heartfelt warmth. But while it’s great that the cast is sexually diverse, and includes a trans woman playing a trans character, and also that the producers have included a number of LGBTQ+ events for young people around this production, sadly the play itself is a bit of a let-down.