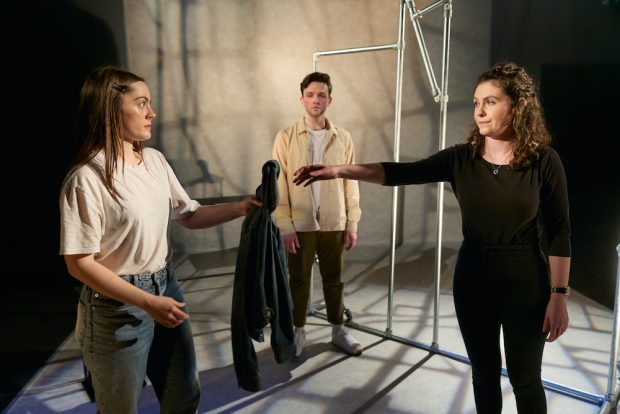 History is a prison. Often, you can’t escape. It imprints its mark on people, environments and language. And nowhere is this more true that in Northern Ireland, where the long history of conflict between the Republican Catholic and the Loyalist Protestant communities is both centuries old, and still raw from the legacy of The Troubles. Kate Reid’s new play, which premiered at the VAULT festival in 2020, and now resurfaces in a co-production between Park Theatre and Plain Heroines, gives a meta-theatrical spin — with the cast also including the playwright — on both the legacy of Bloody Sunday and the recent fight to attain abortion rights.

Fittingly enough, The 4th Country tells the intertwined stories of two families. Conor and Niamh are siblings from a Republican background, whose grandfather was a victim of the Bloody Sunday massacre in 1972, when British soldiers fired and killed 14 unarmed civilians. They both want justice for this crime; and when an ex-paratrooper, called Soldier F, is brought to trial for his actions on that day it looks like they will get some satisfaction. But there is one problem: Conor’s wife, Anna, is an English lawyer who works for the defendant. Should she represent Soldier F, or give up her job and take her husband’s side?

At the same time, there is another Northern Irish story to be told. Until the law was changed in October 2019, abortion was illegal in the Six Counties, which meant that any women who wanted to terminate her pregnancy — for whatever reason — had to have the additional trauma, not to mention expense, of traveling to mainland Britain to have the procedure. Since the law was supported by some members of both communities, the shaming of single women was also a factor. In Reid’s play, spoiler alert, Melanie, a young woman from a Protestant background who meets Anna, finds herself pregnant and has to choose whether to keep the child or not.

The most engaging thing about the staging of these stories is the meta-theatrical aspect of the show, which constantly subverts the usual naturalistic genre of British new writing. By doing this, the theatre-makers are pointing out that, although these situations are rooted in real social, cultural and political conflicts, they are also fictions. And sites of conflicting interpretation. And also an entertainment. There is a cheery attitude to public prejudices about what Irish theatre is: more than once, the litany of clichés — leprechauns, fiddles, Riverdance, whiskey and Sinéad O’Connor — is referred to, and the play both explores such stereotypes and subverts them. It also wryly suggests that, if we don’t understand something about Northern Ireland, we should google it.

Reid’s writing brilliantly discusses some intractable political issues, such as when can justice be done to the victims of the British Army’s occupation of the province, without losing either its light touch or skimping on the personal aspects of the situations she has created. The complexity of the conflict between Catholics, Protestants and the English, and the whole legacy of colonialism, is acknowledged, with no cardboard villains or sentimentality. The various markers of identity in Northern Ireland — your name, what you call Derry/Londonderry, your ability to speak Irish, the school you went to — are all here. The best dialogues in this 70 minute piece are heartfelt and moving, and the tension between being part of a culture of secrecy and wanting — like Niamh eventually does — to tell the world your story is well realized.

Gabriella Bird’s production, designed by Jida Akil, is light and fast, and the minimalist props are artfully used by the young company, who — playing themselves as well as the characters — are both convincing in the serious moments and amusing in the humorous ones. Reid, who plays Melanie, is a good contrast to both Rachael Rooney’s Niamh and Aoife Kennan’s Anna, and they are the emotional core of the play. Kennan also plays Shona, a civil servant, in the most satirical scene in the drama. As Conor, Cormac Elliott represents a sympathetic and sensitive masculinity, far from the stereotype of aggressive Northern Irish manhood. Although, in the end, this is a slender piece, whose drama doesn’t really build into an overarching plot, it is also an intelligent and enjoyable example of contemporary political theatre.