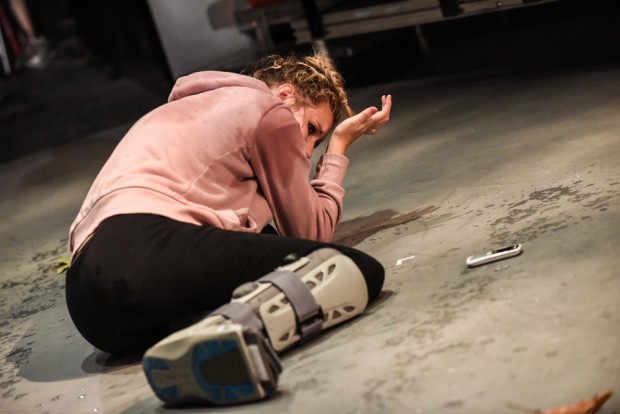 The Hampstead Theatre in Swiss Cottage has a Downstairs studio space that specialises in new writing. Supported by philanthropist Peter Wolff, it has staged some 30 plays during the past five years, many of them by first-time playwrights. A selection of these have recently been transferred to the smaller stage of the Trafalgar Studios in a mini-season which featured accomplished thrillers which tackled social problems head on. Each of these plays — James Fritz’s Four Minutes Twelve Seconds and Morgan Lloyd Malcolm’s The Wasp — featured damaged young women, and the latest, Phil Davies’s debut play Firebird, is no different.

If this play is slighter and less satisfying than its predecessors, it is still a powerful account of an acute contemporary problem, in this case the Rochdale and Rotterham abuse scandals (some of whose perpetrators coincidentally were sent to jail last week). Firebird is set in the Greater Manchester area, and has clearly been influenced by news of the systematic grooming and sexual exploitation of underage girls by men of Asian heritage that took place in Rochdale and elsewhere. Davies himself comes from Rochdale and says that the scandal made him think about some of the girls he’d gone to school with, and wonder whether they might have been caught up in the child sexual exploitation ring.

Although the vast majority of child sex offences in Britain are committed by white males, Davies focuses in this drama on a young white teen who is abused by men of Asian heritage. Firebird shines a bright light on Tia, a 14-year-old who comes from a troubled background and who is soon blazing on all cylinders. Like some of the other anguished females in recent British plays — Effie in Gary Owen’s Iphigenia in Splott, Girl in Annie Ryan’s A Girl Is a Half-Formed Thing, or even Nicola in Milly Thomas’s Clickbait — Tia is both feisty and fragile. Her low self-esteem oozes out of her pores and the scent of vulnerability attracts manipulative men and exploitative thugs. Her soft core is masked by a loud mouth and a strong character, neither of which is going to help her much.

Firebird begins near the end of her story, when is living in a shelter, and has a new friend, Katie, for company. They both play and bicker, as Tia tries to learn to relate to a normal young adult, but things are psychologically difficult. Davies shows us a damaged youngster who has never really acquired the social skills necessary to be a child among other children. Instead, she has focused all her ambitions on pleasing the grown-ups, and in this case this means men. Unsuitable men. Abusive men. Exploitative men. Clearly, the lack of love in her upbringing has convinced her that they only way to get on is to make friends with older men. And the easiest way to make friends with older men is to offer sex.

In scene two, which happens several months previously, we see that it is not so much that Tia is offering anything as that AJ, a slick young Asian man who says that he’s a youth worker, is grooming her. They meet one rainy night in a chip shop, and AJ immediately starts to size her up, and sweet-talk her. He buys her chips; he buys her coke; he offers to give her a cigarette case. Power relations such as this are not easy viewing, but the encounter has a compelling quality to it. Our hearts fall as we realise that she has no idea of what he is doing. She just wants to be loved; he just wants to sell her on. The result of this meeting is then quickly played out.

At about 75 minutes in length this is a rather rapidly told story, and I was interested in, but never saw, the one character in Tia’s life that might have helped her, but doesn’t appear on stage: her foster mother. A couple more scenes could have fleshed this sad tale out a bit more, and given the story a bit more weight. But, that said, the writing is very good, well paced, well nuanced and well observed, and Edward Hall’s production, designed by Polly Sullivan, is excellent, being energetic, humorous and moving.

Playing Tia is Callie Cooke, who make her professional debut in this show when it was at the Hampstead last year, and whose performance is lively and lifelike: I was totally convinced by her mouthy confidence and by her raw vulnerability. I worried that she was yet another female victim at a time when there is no shortage of such on the British stage, but Cooke’s detailed performance also gave me a flash of hope. Likewise, Tahirah Sharif’s Katie combined softness and toughness in equal measure. The final stage image of the two of them was powerful indeed.

Phadlut Sharma plays both the creepy and violent AJ and a police officer, a casting decision which runs the risk of equating abusers with authority figures as both being the enemy of young teens (and, anyway, wouldn’t there be a female police officer on hand in a case like this?), which is a bit depressing. Still, this is a punchy thriller that grabs a burning issue without being afraid of burning its hands. More power to the Hampstead Downstairs.