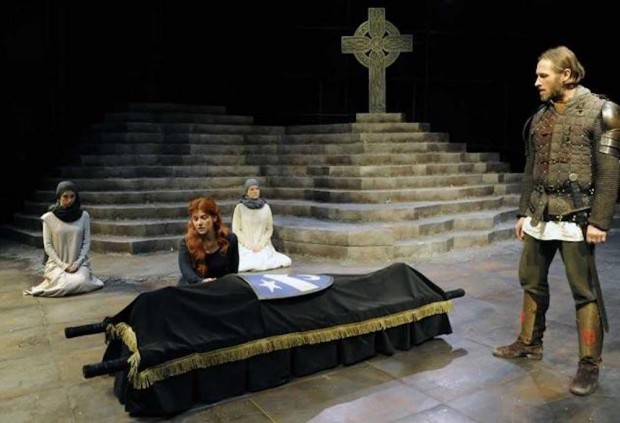 What happened in Scotland after the death of Macbeth? This engrossing new play by David Greig, which looks at the aftermath of the 11th-century English invasion of the northern kingdom, offers a fine mixture of contemporary resonance and a thrilling account of culture clash. Starting off with the attack of the English, disguised as Burnham Wood, and Macbeth’s last stand, the play rapidly opens out on a far more interesting landscape.

The English invaders are led by the Northumbrian Siward, who helps the weak Malcolm onto the throne of Scotland. But one of his first discoveries is that Macbeth’s widow, the scheming Gruach, is still alive. Reports of her death in Shakespeare’s drama were, it seems, premature. And she has a teenage son by her first marriage who is regarded by the warlords of Moray as the rightful heir to the throne. Thus Siward’s mission to spread justice and freedom soon gets bogged down in vicious faction-fighting.

It also gets bogged down in, well, Scottish boglands. As the first character to appear, the Boy Soldier, keeps pointing out, Scotland is an inhospitable land, craggy, hard and cold. As he narrates the story, in the guise of letters home to his mum in Kent, the sheer alienation of the English in a country they don’t know and cannot understand comes across with force and conviction.

But Greig’s greatest coup is his vision of the culture class between the English and the Scots. As Malcolm makes clear to Siward in their first scene, you can’t be too literal-minded when you come to Scottish politics: things are much more complex than they appear. As the play expands, both Malcolm and Gruach try to teach the English some of the subtlety and guile necessary to succeed in their feud-fighting society.

Like other invading forces, nearer home in time, the English are deaf to this good advice. Instead of playing the local game, Siward and his subordinate Egham try to impose their own definition of victory: burning villages, raping women and arresting any teenager who might be Gruach’s son. But in the face of insurgency and resistance, they are powerless — and so the death toll rises.

This is no dry-as-dust history play, and Greig’s language is contemporary, allusive and forthright. There are plenty of moments of dark wit as well as passages of cunning reasoning that delight the mind as much as tickling the belly. As an imaginative vision of a fictional Scotland, still in the throes of defining herself for herself, and in the process becoming a thorn in the side of her southern neighbour, this makes for a superb drama.

Roxana Silbert’s excellent production for the RSC brings out the humour of the piece as well as its contemporary resonance. The set, by Robert Innes Hopkins, both reconfigures the space of the Hampstead theatre and offers a world of grey slate, topped by a grey Celtic cross and some grey trees, an environment as inhospitable as the depths of a loch. The music, composed by Nick Powell, is a neat mix of electronic rock and Gaelic chant, which evokes two worlds, the past and the present.

As Siward, Jonny Phillips comes across as a man gradually driven to desperation not only by his son’s death in battle but also by his inability to understand the new circumstances of this strange land. Equally compelling is Siobhan Redmond as the redhead spitfire Gruach, while Sam Swann is charming as the Boy Soldier. Dunsinane is an excellent play that is both a parable for our times and a timeless meditation on how human beings excel in political misunderstandings.