Home » Reviews » The Same Deep Water As Me, Donmar Warehouse

The Same Deep Water As Me, Donmar Warehouse 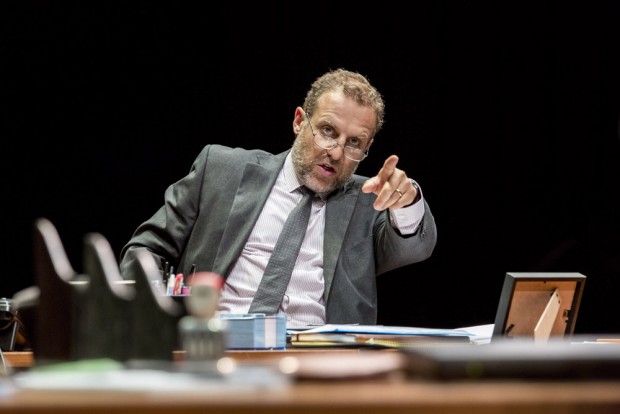 Britain today: while the total number of car crashes is falling the amount of whiplash claims is rising by 25 per cent. Yes, the compensation culture is speeding ahead. In Nick Payne’s follow up to his immensely successful West End transfer, Constellations, a firm of personal injury claims lawyers is the setting for a scam in which a money-spinning lie goes wrong. It’s the stuff of many a Newsnight report, but can he make a social issue interesting as a drama?

We arrive at the offices of Scorpion Claims (designed by Scott Pask), based in Luton and run by Barry, or Bazza, a fiftysomething plodder who has little light on his eyes, yet is more honest than not. His employee, Andrew, is younger and less scrupulous, and when his old schoolfriend Kevin, a bigmouth taxi driver, arrives with a plan to make easy money, the scam is born. Predictably enough, all goes well for a while before one of the fake claims is contested by the nation’s favourite supermarket chain.

This is the world of the no-win-no-fee claims, familiar from television adverts and nuisance phone calls. As the plot unfolds, we move from the shabby offices of Scorpion Claims to Luton County Court, where the case is tried. Payne’s knack for staging embarrassing and excruciating human situations comes into play as an obviously fake accident is dissected and exposed, yet will this court deliver justice, either legally or poetically?

Payne writes with a real talent for eccentric and quirky ideas that come across as pure theatrical delight: a wonky fan in a stifling office comes on by itself; Barry offers a range of exotic teas to the working-class and bemused Kevin; one character arrives in a bicycle helmet, but without a bike; a scene is played out during a power cut; a spread of scratch cards have mindboggling names; a joke is told but without its punchline; in court there’s a farcical moment about the need to wear a suit and tie. As well as such incidental pleasures, Payne also writes one-liners which hit the cortex with the full force of a stubbed toe in a darkened room. Of the memorable phrases that his characters use, a small dictionary of quotations could be compiled. One woman character exclaims that she feels “like I been caught having a wank in the vet’s”. Guaranteed to bring the house down. And it does.

And yet none of this is enough. In a play where most of the characters are self-serving there are no real moral dilemmas. There is no moral debate, no moral core. The bad succeed but are not happy; the good fail but are not happy; even the happy are not really happy. This might well be an accurate glimpse of our national malaise, but it acts as a drag on the drama. Likewise missing, presumed absent, is any real emotional core: a final scene in which Andrew meets his childhood sweetheart feels like a belated attempt to fill this void. But it’s not a winner.

Still, the production is smoothly directed by John Crowley, with engaging performances by Daniel Mays as the awkward chancer Andrew, Marc Wootton as the mouthy wideboy Kevin and Nigel Lindsay as the hangdog Barry. Monica Dolan plays two characters from opposite ends of the social spectrum, while Peter Forbes delivers a smooth turn as a court judge. Isabella Laughland, who was also in Payne’s Wanderlust, amuses as a Tesco van driver. But even a great cast can’t really compensate for disappointed expectations.